We've hit a few Disney movies I hadn't seen in this batch. While I remember The Fox and the Hound through a veil of tears, I had never seen The Black Cauldron, The Great Mouse Detective, or Oliver and Company. I'm guessing it's because I was a young teenager right as they came out. I'm sure I thought I was "too old" for "kid cartoons." Luckily I grew out of that misconception not long after. I was looking forward to seeing Roger Rabbit and The Little Mermaid again.

I still know *all* the songs in the Little Mermaid. For me, that's when Disney became a double threat hitting my musical nerd and fairy tale fan buttons all at the same time.

My daughter had seen NONE of these, though she's familiar with the music from The Little Mermaid since our middle school put it on as a musical a year or two ago.

So here's what we thought of 80s Disney:

Fox and the Hound: We knew we were set up for heartbreak from the outset. Heck, Todd's mother didn't last as long as Bambi's! We sat and talked about this one for a while when it was over because it was pretty morally complicated.

The hunter and his dogs weren't just simple villains (though the movie is pretty solidly anti-hunting), but what hope was there for the doomed friendship between natural enemies? And what a bittersweet ending. Way more adult and nuanced than we were expecting.

The Black Cauldron: So, is Gurgi actually Smeagol? The vocal resemblance was uncanny, even down to some of the lines (munchies and crunchies? talking about himself in the third person?) This Disney film had a very different feel than any of the previous ones. It wasn't a musical--no songs at

all, actually. It was darker and more directly scary than any of the others, too. We found it a little sloppy in building character arcs, so lacking in the emotional impact it might have had, but definitely worth seeing. While we enjoyed it, it didn't feel like a Disney movie to us.

The Great Mouse Detective was definitely more for me than for my twelve year old. She knows who Sherlock Holmes is only vaguely, and certainly didn't know about Basil Rathbone, so some of the Easter Eggs remained hidden for her, while I was cackling with inner glee. We both love Vincent Price, though, and he was magnificent as Ratigan. Still she found our Dr. Dawson charming in the same way as The Rescuers' Bernard. A very satisfying little gem we would watch again. 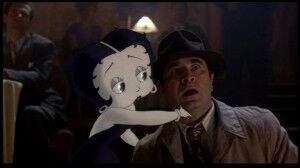 Roger Rabbit, too, was filled with references that went right over my girl's head. She's not steeped in noir like I am.

On the other hand, she is a fan of old animation, so she had a blast identifying old characters as they wandered through and where they are from. We were both so pleased to see Betty Boop.

When I watched this one for the first time (when it was new), I had not predicted the big bad guy reveal until just before it happened, and I was pleased that my daughter didn't guess ahead of time either. She's far too good at guessing where a story is going, so she's hard to surprise with a twist!

We were both lukewarm on Oliver and Company. We liked the relationship between Fagin and the dogs, and Sikes was a strong villain, but the whole thing just felt a little lackluster. Maybe too polished? It's the first time Disney used established singers like Billy Joel and Bette Midler as opposed to voice actors. It didn't feel like the characters were singing the songs, but like they were lip syncing, if that makes any sense. In fact, writing this now, a few days later, I can't remember a single song from the film. I guess music is a bigger part of what we love in Disney than I realized.

That made The Little Mermaid truly welcome. It's the first of a new style of Disney princesses that dominated the 1990s and still continues today: spunky women with agency.

It really feels like a stage musical, too, hitting all the expected notes: a yearning ballad for our heroine, a gloating moment for the villain, a comedy number (the cook), a setting piece (Under the Sea), etc.

Instead of the musical numbers being a break from the action as they often were in older films, the songs are the major vehicle for the emotional highpoints. We're only missing the hero and heroine singing their love together, but in most of the screentime they share, her voice is stuck in a seashell, so there are some limits there.

My daughter commented repeatedly on how strange Ariel looks--giant headed with shockingly skinny arms, ridiculously small waist, etc. I have to agree--even in a long field of unrealistic portrayals of female bodies, Ariel stands out (swims out?) as ridiculously proportioned.

And, as a Greek mythology buff, my girl was confused by this version of Poseidon, who seems to be less of a god of the sea and more of just the king of the merpeople, but who has some of Poseidon's traditional attributes and powers.

But we really enjoyed it and I'm looking forward to enjoying 1990s Disney with her.