To put these in perspective for my daughter, I told her that these films were new when Grandma and Grandpa were little. I'm glad we're finally back in feature length films. The shorter pieces collected in anthologies were not my jam in the same way. Most of this next slew of films I actually remember pretty well from childhood.

Even though I'm not as old as these films, they all had theatrical re-releases and at one point or another, I (or my parents) have owned them on VHS or DVD. So, since our last report, the littlest Bryant and I have watched: Cinderella (1950), Alice in Wonderland (1951), Peter Pan (1953).

My daughter thought she would like Alice, but was lukewarm on Cinderella and Peter going in. I remembered Cinderella the most fondly.

Surprisingly, Cinderella was the one we both liked best. The character gets a bad rap in some ways, being lumped in with other, more passive princesses waiting for their prince to come and rescue them. 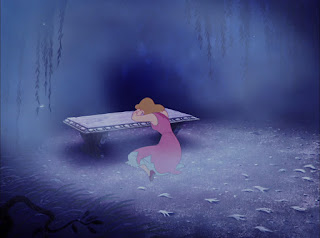 But this version of Cinderella is a hard-working girl. In fact, you get the feeling that, even had her father lived and protected her from the harsh treatment of her stepmother, she would still have been an industrious young woman, using her positive energy to make a difference in the world.

She doesn't waste time bemoaning her lot. It's the mice who complain on her behalf (in song, of course).

Even when she expresses a wish to go to the ball, it's not about changing her lot in life permanently. As my daughter said, "She didn't ask for a prince. She just wanted to put on a pretty dress and go to a party."

The part of the story that's always been hard for me to believe is that a beloved little rich girl who is demoted to housemaid in her own home harbors no resentment or ill will towards those who abuse her. That impossibly kind "heart of gold" element was helped a little in this version.

After the stepsisters tear up the gown the mice made for our heroine, she weeps in the garden and you learn that her positive attitude has been a conscious choice, one that she's now having trouble maintaining in the face of another disappointment. That's a very real set of emotions and won the respect of two Bryant women watching. We hope the prince proves worthy of her. 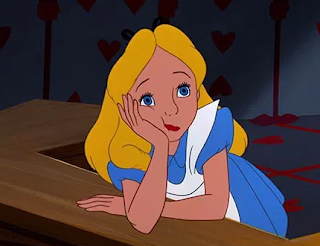 Alice, on the other hand, was not very interesting at all. The cartoon still charms, with its presentation of a cast of madcap characters and crazy scenarios, but Alice herself?

She's petulant and mostly passive, just pushed along by the world she falls into. My daughter liked this one better than I did, but her focus was on the animation--things like the playing card soldiers, the disappearing cheshire cat, and the size changing experiments.

Honestly, Alice herself is rather incidental to the story.

Still Alice was a model of fortitude and feminism in comparison with all the characters in Peter Pan. Oh my! The racism and sexism was rampant.

The over-riding view of girls in the story is that they're here to serve boys. They are petty and jealous, squabbling with each other over the affections of boys because that's all that apparently matters--not what the girls themselves might want, but who can win the attention of the best boy.

Peter himself, well, he's a jerk.

I don't understand why anyone would want him, and my daughter felt the same way. He's a show-off, and only cares about garnering attention for himself. Even his Lost Boys only seem to hold value for him as an audience for his exploits. The kiddo does say that there are several boys with this kind of self-aggrandizing attitude in seventh grade, and she hopes that they grow out of it. I hope so too! She'll have to work with those people someday. 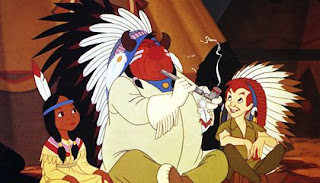 The element that had her gasping with dismay though was the part with Tiger Lily and the "Indians." From pigeon-English to stereotypes of dress, it was horrifyingly racist.

I guess I can be glad that these kinds of depictions are shocking to younger audiences.

That shows some progress.

When my parents were children, kids commonly played "Cowboys and Indians" using these types of characters thoughtlessly.

Even when I was a kid, in the 1970s, we didn't think anything of calling someone an "Indian Giver" or by the use of actual contemporary people as mascots for athletic teams.

The lyrics to "What Makes the Red Man Red" combine racism and sexism into one ugly little tune. Yikes! I'm kind of surprised that Disney airs this one. I wonder why Peter Pan doesn't get the censure that Song of the South does?

About the only saving grace to the film was the Darling family. The children's affection for one another, the push and pull of the wife and husband, the dog who served as a nanny. All lovely and charming. We liked when dad decided that Wendy didn't have to grow up so fast after all. It was nice that he got to end the story remembering the fun and magic of his own childhood, something he had apparently not held onto as he grew up.

Lady and the Tramp is up next! Looking forward to that one. I hope it's still as charming and romantic as I remember it!
Posted by Samantha Bryant at 6:00 AM