Life After Losing a Child

I've been thinking a lot about my friend Michelle. About a year ago, she lost her four-year-old boy to DIPG (a rare brain tumor). Michelle and I weren't terribly close--she came into my life as my realtor--and I only met her son once. But her story affected me profoundly.

I have children, one 9 and one 2. That's probably why I feel so affected. It's why crappy movies on Lifetime can bring women to tears--it's way too easy to imagine how your whole world would crumble to dust if the light brought by your children were extinguished. I've been following Michelle's journey through her grief on caringbridge and on facebook. I keep wishing for something I can do to ease her pain, even knowing that, were that grief my own, there's nothing anyone could do.

Without you,
my child,
there's no joy in a yellow punch buggy
glistening in the sun,
no wonder
in a green moth
clinging to our screen door,
or dark clouds
drifting across a full moon.
Without you,
a squirrel eating a nut on our deck
can burst through the patched-up dam
of my heart
and drown me anew
in tears.
Posted by Samantha Bryant at 9:34 AM No comments:

How to Let it Go 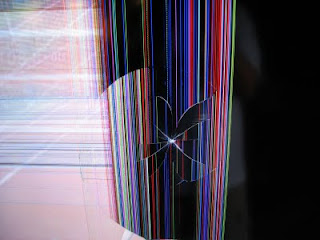 We bought a new TV. An awesome one. I don't really understand all the terminology--I'm techy, but not quite that techy--but I know it had something to do with 1080 and it meant that when I watched blueray movies it looked like I could walk into the TV and participate. We had it less than a week.

And I broke it.

It was a dumb accident, not really my fault and also totally my fault, because who else's fault could it be? I was trying to be good and work out. My current favorite workout is EA Sports Active on the Wii. If you've ever tried to do EA Sports Active on the Wii, then you know that the cord connecting the nunchuk to the wiimote is the bane of your existence in this "game."

In short, the two devices banged together, the battery cover flew off the wiimote, the batteries went flying and one hit the TV. BANG! A spiderweb impact and a black zone of nothing and rainbow lines down the middle third of the TV.

I think I cried for most of the afternoon. Even after it was obvious that my husband recognized it as an accident and wasn't at all put out with me.

Yesterday, the hubby wished that we had been able to do our original plan and make the downstairs TV into an upstairs TV. We have houseguests and he was looking for a little time to himself. I melted down as if he had accused me of breaking it on purpose, which, of course, he did not. He was just being wistful.

So, trying to figure out how to let it go. It's done. It can't be fixed. There's nothing to be done, but keep making the payments on a lovely new toy that is destined for the garbage.
Posted by Samantha Bryant at 9:30 AM No comments: