At last our Disney+ Project has come to the heart of the films that I remember and love best from my own childhood. All of these were still made before I was born, but there are also all films that I've seen repeatedly, on the big and small screens, on VHS, on DVD, as a child, an adult, and a mother. Lady and the Tramp is one of my earliest favorites, softie that I am for dogs, and Jungle Book was my oldest daughter's favorite--practically all she watched for nearly an entire year when she about two years old.

My youngest daughter had seen Sleeping Beauty, but none of the others.

In fact, until we started this project, she's always been kind of anti-Disney, at least the princesses. When we moved into this house, the room that was hers was lined with a Disney Princess border presumably chosen by another little girl who lived there before her. She was more of a Ninja Turtles girl at the time, and she always hated that border. Although she did have a dress up dress or two that came from the Disney collection, she just never got into the princess culture. She's a rebel that way--liking to find things to like that people are surprised by. (Does that mean she's a hipster?)

Makes her a fun viewing companion for sure.

So, our short-takes on these films: 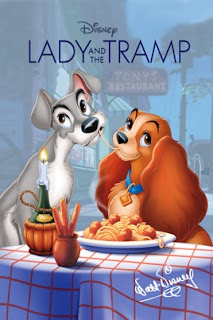 Lady and the Tramp: Still charming! The spaghetti scene is totally adorable and you knew Tramp was a goner when he nosed that meatball over to Lady. I still cried when Trusty was seemingly dead--even though I knew he wasn't really.

My daughter overall liked it, too, enjoying the neighbor dogs and getting angry at the Auntie who muzzled and chained Lady because she was a cat person and didn't get it. She was also completely charmed by the spaghetti scene.

The Siamese cats are pretty horrifying in the same way the crows from Dumbo were--full of outmoded racial stereotypes. In a movie where all the other animals talk perfectly well, they speak a pigeon English, that coupled with the faux Asian music is truly cringe-worthy.

The 50s definitely left their stamp on the gender dynamics at play. The female is there to tame and civilize the male who will settle down now that he's had time to "sow his wild oats." (insert gagging sound). At least they both do seem genuinely happy at the end, leaving you with a feeling that theirs is a romance that will last. I wonder what Tramp's midlife crisis will look like?

Animation-wise, it was really interesting--maybe the most interesting in that regard of this batch of movies. There's a scene where Aurora is laid out after touching the spindle where the blanket and draperies in the room look so real you can touch them, even though the characters themselves don't look any more realistic than past animated humans. "Illuminated manuscript" touches throughout make it a stunner visually (Aurora's hair in some scenes!), and Maleficent in dragon form is still scary!

But there's a lot of too-stupid-to-live going on. Neither my daughter nor I like stories where, in the name of protecting some young female character, we keep her ignorant and isolated. Well, duh! If you don't teach her anything about the dangers surrounding her, of course she's going to fall for it!

Rather than destroying all spinning wheels, how about we teach her about them and directly tell her that it's a bad idea for her to touch one?

Instead of sending her off into the woods to live with three sweet, but incompetent fairies, how about her parents get to raise the child they wanted so very badly? My daughter in particular found that ridiculous. They never actually get to be parents--their child is sent away as an infant and comes back a bride. 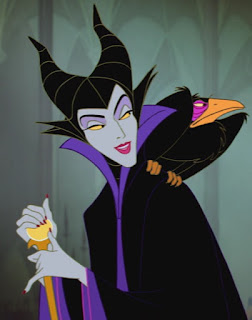 If we know her 16th birthday was the danger day, then why on earth was she alone for even a single second on that day? She's a princess, for goodness sake! There are any number of servants, guards, knights, and other kinds of workers that might have intervened.

On the other hand, it was nice that she and her prince met without knowing who each other was and fell in love. Very romantic in that "meant to be" kind of way so appealing in fairy tales.

The three fairies were cute as heck and sometimes very clever (when they weren't being too stupid to live--like going from no magic to spewing magic lights out the chimney while they argued about dress color).

Maleficent is magnificent. (I still haven't watched the live action movies, BTW, because I like Maleficent being evil without explanation; I don't have any desire to learn and empathize with causes or to see her redeemed--sometimes it's good to just have a straight-up, old-fashioned villainous villain!) Eleanor Audley's voicework was stunning--and the kiddo noticed it was the same actress who'd done Cinderella's stepmother. Good ear!

After Sleeping Beauty, it was back to the dogs with 101 Dalmatians.

This might be our favorite of the group, at least for story. From Pongo's match-making beginning to the cross country adventure to save the puppies pulling in an entire network of canines, we were absolutely charmed. How nice that the dogs helped Roger and Anita find one another. The wet handkerchief laughter is such a "meet cute" memory.

And Cruella de Vil? Only the best villain of all time. She totally deserved her song!

This was the first time the credits were interesting. That animated Dalmatian spot grooving to a hot jazz sound? And the best fiction in the whole thing? That after selling one hit song, Roger can afford a country house to keep 101 dogs in! 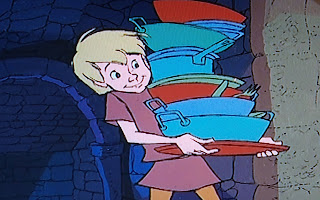 The Sword and the Stone was our least favorite of the set. My daughter rated it "B for boring." Wart's scratchy voice irritated her, too, and she thought Merlin was worse than useless--actively harmful to the boy he was supposedly teaching.

I liked it more than my daughter did, but I see her point about Merlin. Given that he's supposed to be mentoring the king who became the heart of England, the tutoring lessons seem to only play for comedy with no build-up of any kind of insight or new skill that might help a boy become a powerful leader. I guess he learned that owls are more reliable than old men if you get in a bind? I think he was supposed to learning to use his mind instead of fighting with brawn, but really he just got in trouble and was rescued.

Wart himself suffers from a very sanitized version of poverty and servitude, where despite being worked very hard and mistreated by his foster family, he still buys into their life completely and never becomes angry or resentful about his lot in life. A perfect "grateful orphan" I suppose--the kind one finds in fiction only, because in real life traumatic experiences affect us and a child faced with an entire room full of dishes to scrub doesn't greet them with peaceful acceptance.

There were lots of fun and funny moments, but in the end, it felt like a string of moments and not a cohesive story with character arcs. 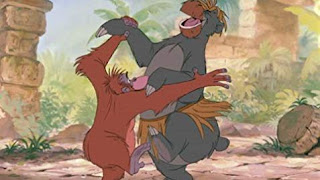 It's hard for me to judge The Jungle Book with any kind of objectivity because it was a favorite of mine twice--once in my own childhood and again with my older daughter, who was absolutely obsessed with it as a toddler.

Sometimes, when I am walking around I catch myself humming the tune to the "fetching the water song" at the very end.

My daughter agrees that this was miles above any Disney film so far for the music. Long before we began this project, she was already in love with Louis Prima's "I Wanna Be Like You" which is right up her musical alley. "The Bare Necessities" is irresistible and Phil Harris is one of my favorite voice actors ever. So looking forward to getting to Thomas O'Malley and Little John in upcoming films!

"We're Your Friends" with the vultures is full of lines with double meaning and dark humor that are absolutely delightful.

The movie is a visual treat, too, combining realistic animal movement and gorgeous scenery with slapstick comedy and anthropomorphism at its comedic best.

I guess I still love it . . .though that little girl at the end is awfully grown up for age 9 or so, and enticing the boy back human village life with a pair of long eyelashes had the girl and I rolling our eyes. Hmmmm…looking forward to seeing what she think of Tarzan when we get there. Another man's world vs. animal world with a character who crosses between.

Revisiting all these old movies and experiencing them with my daughter--a total 21st century girl--is an education and a delight. Looking forward to the next one!
Posted by Samantha Bryant at 9:22 PM