9 years of writing every day 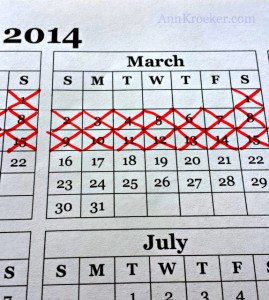 I hit a new milestone in my writing life today: 9 years of writing every single day, at least 250 words.
That may not sound like much, but the results have been nothing to sneeze at. At that slow and steady rate, I've completed several novels and seen them out into the world.
All my life, I've both needed and resisted structure.
I guess I'm contrarian that way.
But whether I'd like to admit it or not, every time I've succeeded at anything important, there's been a daily practice involved. And, for me, it has to be daily. I can't do something on Mondays and Thursdays, or every other day, and get the same results.
Even though my creative side decries fences, saying it wants to run free, all evidence shows that I'm actually a lot more creative when I have some constraints. So my entire writing life has been a push-and-pull between these conflicting ideas. I might chafe at rules (even when I'm the one who made them), but I have to begrudgingly admit that they're effective on me.
My rule is that I have to write every single day, come hell or high water.
I set the bar for what counts as having written relatively low: 250 words. One page. Because even on a horrible day, when I have a fever or when some crisis hits, I can write at least that much. Because even with arthritis, I can write that much by hand on the back of receipts if my technology fails or I'm trapped in traffic or other disasters strike.
One key to making your goals is setting achievable, realistic goals. Of course, I want more than 250 words each day (and I often get them), but I can *always* get 250 words, so I'm setting myself up for success.
When I started trying to write 250 words a day, it was difficult. It sometimes took me hours…and I struggled to get those hours. My kids were young, my dog was impatient, and I had tremendous guilt about taking that time away from other ways I could be of use to my family and the world. But, if I was going to realize my dream of being a writer at any level, I was going to have to make a commitment and stick to it.
So I did.
As writing 250 words a day became easier over the years (I've done it in as few as 15 minutes on a good night), I raised the bar a little, shooting for 800 words on school days and 2000 words on non-school days. But that's the stretch goal. As long as I write 250 words, the daily writing chain continues to grow.
These days, I make 800 pretty regularly. On nights where I have to settle for *only* the 250, it feels like settling, and leaves me more determined to make more words the next day.
The longer the chain became, the less likely it became that I would break it. After nine years, if I get to bedtime and haven't written, it's like some kind of alarm going off in the back of my brain. I won't be able to sleep until I do it.
Plenty of nights the words are no good. Often, when I come back the next day, I start by throwing out the garbage I wrote the night before and starting fresh. But, there's the magic. You can improve on bad writing, but there has to be something *there* before you can work on making it something good.
So, here I am nine years later, and writing every day is a given, up there with brushing my teeth. It's brain hygiene :-) So far in 2021, I've written 283,796 words (not counting the ones I'm writing right now).  That includes work on two novels, several short stories, book reviews, blog posts, and other hard-to-categorize things.  Remind me, when I'm feeling like I didn't do that much this year, will you?
Posted by Samantha Bryant at 8:52 PM 2 comments:

How Do I Know When I've Succeeded?

Our Twitter handle is @TheIWSG and hashtag is #IWSG.
September 1 question - How do you define success as a writer? Is it holding your book in your hand? Having a short story published? Making a certain amount of income from your writing?

The awesome co-hosts for the August 4 posting of the IWSG are  Rebecca Douglass, T. Powell Coltrin @Journaling Woman, Natalie Aguirre, Karen Lynn, and C. Lee McKenzie! Be sure to check out what they have to say, and visit other writers in the blog hop!
________________________________________
I've had some great successes in my writing life so far. There are plenty of moments in my career that feel like accomplishments and achievements. It's important to remind myself of that from time to time, because success is an ever-moving target and it's easy to feel like a failure and dismiss all the successes you've already had getting this far.
So, in the spirit of remembering my successes while I strive for new ones, here are some of my highlights (the brag book!)
So, by a lot of standards, I've already been pretty successful as a writer. But I'm an ambitious gal. I want more!
I want to make my living (enough to pay the bills) from my writing. I want to see my work translated into other languages. I'd love to see my work picked up for television or movies (and to receive the paycheck that goes with that). I'd like to finish the book I'm working on now, and the several other projects languishing on my back burners, and do all those stories and characters justice.
So, I think that's the trick with success.
We're always succeeding, with each teeny tiny baby step we take toward meeting our goals. But we're also always failing, because if you accomplish a goal, you tend to set a new one, further out on the horizon and start striving all over again.
Just remember that there are MANY definitions of success, and you need to define it for yourself. Don't worry about what other people are doing--they're not you, and comparing yourself to other writers and their careers can be maddening.
How do you define success for yourself? What do you do to remind yourself of all you've already accomplished?
Posted by Samantha Bryant at 6:00 AM 9 comments: