We're on holiday vacation now, which means we can spare a little more time for enjoying some couch time together. The littlest Bryant and I are continuing our Disney+ Project. In the past few days, we've watch Dumbo, Bambi, Saludos Amigos, and The Three Caballeros.

We missed Victory Through Air Power. It wasn't available on Disney+ and appears to have been a propaganda film of the war era. I'd still like to see it sometime, but it won't be part of this project since it's not available on the Disney+ service. 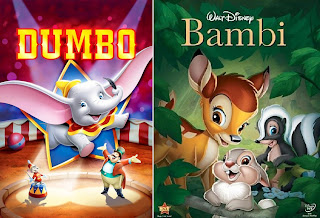 Truth be told, I was dreading watching Dumbo and Bambi. I remembered them as traumatizing from childhood.

They're still a bit brutal by contemporary standards for children's entertainment, but not as bad as I remembered. Of course, I'm also no longer six.

Poor Dumbo's mother is incarcerated for trying to protect her baby and he himself is subject to bullying from what should have been his community. Thank goodness for Timothy Q. Mouse! A spark of human kindness (in mouse form) in an otherwise desolate landscape.

Bambi may have fared better. Though he lost his mother, he still had a loving father and a loving community around him. His tragedy feels less tragic.

First Dumbo. How hateful is it that the movie is titled with the derogatory nickname awarded a child by bullies? His real name is Jumbo, Jr. (And where is Jumbo, senior, BTW? He's even more absent than Bambi's dad).

My daughter and I both had trouble getting our minds around how making Dumbo a circus star was supposed to help his poor incarcerated mother. This wasn't a movie where animals could talk to humans, so the new circus star Dumbo would exactly be able to demand his mother's freedom in exchange for his work.

Then again, maybe the empathetic Timothy Q. Mouse was just trying to keep hope in his friend's life and help him build a life for himself. 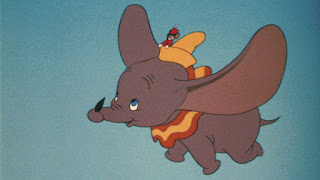 Even the twelve-year-old watching with me questioned the kid-logic of the plan. The story reminded us both of the old stop motion Rudolph in that there is socially sanctioned bullying a child by adults and dubious messaging about what is and isn't supposed to be acceptable.

Those other elephants were horrid. First they pick on a baby elephant for his unusual physical attributes, then they shun him when, effectively orphaned, he takes work as a clown. Those elephants felt like they could have the society dames on Downton Abbey, or like Oscar Wilde might have enjoyed lampooning them in a play. Lady Bracknell as dowager elephant.

The drunken elephant sequence was still horrifying, and the minstrel crows made me cringe. Kudos to our society that my twelve-year-old didn't understand the depictions overall. I'm proud that she needed an explanation to understand what was going on with the crows. She's not familiar with those particular racial stereotypes, which means they're probably dying! w00t!

When the movie ended, after only a little over an hour, my daughter's main comment was that "they wrapped that up awfully quickly." I agree. It's like 55 minutes of abusing a child, followed by 10 minutes of magically making it all better. I guess it was easier than writing a real resolution to problems a baby elephant had no power to effect.

Now, Bambi. Bambi is a very odd movie. It feel more like a nature documentary with a little more anthropomorphism than usual. We watch a cycle of life: baby deer is born, grows up, faces dangers, survives, and we end with another baby deer (twins this time!). The joy in watching Bambi is the art of it. It's beautiful visually--water drops, naturalistic animal movement, forest greenery, light, and even the fire. (It is a little disconcerting how all so many of the female animals end up looking like they're wearing makeup though--like eyeshadow is what defines femininity).

My daughter thought they did an amazing job making the animals' mouths move in a way that still let them look like deer, rabbits, birds, etc., but made speech believable. I hadn't considered that, but I have to agree.

Bambi's mother's death didn't hit my daughter as hard as it hit me as a child. Maybe it's a difference in us as people, or a difference in what age we saw the film at (I was much younger when I saw it for the first time than her current twelve years). But she took it more in stride than I did as a child.

Compared to the kidney-punch-in-the-feels approach of a contemporary Pixar film, Bambi's mother's death felt, if anything, underplayed and subtle. While the gunshot ringing out and the silence that follows are still harrowing, Bambi (and the viewer) does not see his mother die, and he is not left long without guidance.

He is sad, but we quickly move forward in time to springtime and puberty to continue the cycle of life. As I mentioned above, Bambi has a good social support network, with a father who steps up and friends that stay by his side. The entire forest community is on the lookout for him. In that way, he's a very lucky boy. 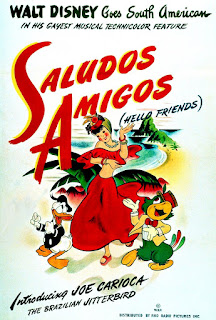 After the two tearjerkers in a row, my daughter and I were happy to move onto "lighter" fare in Saludos Amigos and The Three Cabelleros. Saludos Amigos was a lot like The Reluctant Dragon in that it intermixed live action with cartoons and was, in part, a behind-the-scenes narrative about how animated features were made, involving animators traveling to South America to study the culture and creatures.

The highlight of Saludos Amigos was Goofy in "El Gaucho Goofy" which bears some similarity to "How to Ride a Horse" from The Reluctant Dragon in that it's a lot of physical humor involving Goofy trying to ride a horse. But it was still a lot of fun!

Since we watched it directly before The Three Caballeros, we got to see what the animators did with what they learned in their South American sojourn.

Unfortunately, what they did with it was turn Donald Duck into "a wolf" and throw him at beautiful women (animated and real) made of eye-rolling stereotypes.

So much red lipstick!

Saludos Amigos got a little boring for us before it was over. Maybe because it was mostly a travelogue and we've seen a lot of depictions of that part of the world already, so it was "old news." 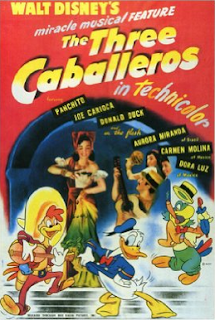 The Three Cabelleros had more animated stories and less educational lecture, so we enjoyed it more. It started strong with the story of "The Cold-Blooded Penguin" Pablo who leaves the South Pole for the Galápagos Islands. Both of us enjoyed the creativity of the story--that bathtub speedboat was the best!

"The Flying Gauchito" was also charming, telling the story of a boy who finds a flying donkey. The other features were far less entertaining and memorable.

The story does feature the first intermixture of animated characters alongside live action ones though, in the form of Donald Duck and José Carioca, a parrot introduced in Saludos Amigos, competing for the attentions of Aurora Miranda, sister of the more famous Carmen Miranda. Intermixing live action and animation has come a long way since 1944 (compare it to Roger Rabbit or Space Jam), but it was an impressive beginning!

Our project continues into the later 1940s now with several features I don't remember ever watching and one that I suspect we won't be able to get: the contentious Song of the South.

I'd love to hear what you remember about any of these features in the comments! Thanks for reading!

Posted by Samantha Bryant at 4:33 PM