Welcome to part three of the Bryant Disney+ project, in which the youngest Bryant and I watch all the animated features in chronological order. You can read our earlier adventures with Snow White and Pinocchio here and with Fantasia here. 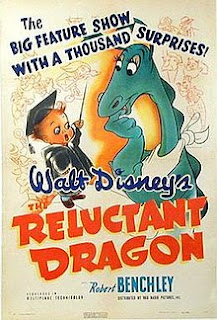 We're up to 1941 and The Reluctant Dragon, an interesting piece consisting of a live action narrative that gives behind-the-scenes access to the animation process at Disney interlaced with shorter animated features.

I didn't remember this one, so it might be one I missed in my youth, or one that I only saw once.

My daughter enjoys nonfiction, informational kinds of shows. I know this, but I was still surprised with how pulled she was by the live action component. I think she may have enjoyed that more than the animated bits. I guess that makes sense given her own love of drawing and animation. It's really right up her alley.

For my part, I found Robert Benchley too smarmy and the narrative that he was wandering the Disney complex avoiding meeting with Walt Disney an odd choice. But I also liked seeing the color mixing, maquette making, storyboarding, expression studies, sound effects, and other aspects of the craft we explored in his adventures.

There was one cringe-inducing moment with an asian woman in the life drawing class with an elephant, and way too much of Benchley flirting with young women trying to do their jobs, but we were both able to just roll our eyes at those sections and move on.

It was very cool to see the face of the man who voiced Donald Duck and a pleasant little treat to find Alan Ladd portraying one of the storyboard men. I loved learning that Clara Cluck was voiced by an opera singer. How fun!

I learned in reading about this movie that it was released during an animation strike, which might explain, at least in part, why it was the sort of piece it was and why several of the people we see in the movie are not actually animators.

The title is a little misleading in that The Reluctant Dragon story itself only makes up the last fifteen or so minutes of the feature. It's a charming story about a dragon who is uninterested in fighting and would rather drink tea and recite poetry. We both enjoyed it immensely. 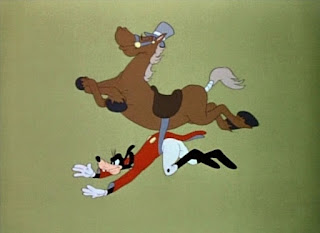 Other stories included a black and white segment from "Casey Junior" (from Dumbo), "Baby Weems" told partly in storyboard and partly fully animated, and Goofy's "How to Ride a Horse."

The song from Casey Junior has been running through my head since our watching--it's a darn catchy thing.

Baby Weems was just okay, not really charming either one of us, but we both loved How to Ride a Horse. If you're already a Goofy fan, then you know what to expect and won't be disappointed. Lots of good natured foolishness and hilarious physical comedy.

Alongside this one, we also watched a couple of older shorts including Ferdinand the Bull, a childhood favorite of mine that is still pretty fun (though I wonder if I would feel that way if I were a Spaniard) and The Plausible Impossible, a feature in which Walt Disney talked about the concept of making impossible things seems plausible in animation.

Next we're taking on Dumbo and Bambi, more traditional full length features. It's funny that my daughter has seen neither of these films, but already knows that we're in for a rough go in terms of sad stories. I guess the stories are just that engrained in American culture that she knows them to some extent even though she hasn't viewed them. I'm looking forward to finding out what she thinks!
Posted by Samantha Bryant at 6:00 AM