As of yesterday evening, I am a winner in 2013 NaNoWriMo. For those not in the know NaNoWriMo is short for National Novel Writing Month, or as other people know it: November.  The idea is that you write 50,000 words in 30 days. It amounts to 1,667 words per day if you break out in even pieces. You "win" if you succeed in reaching the target word count.

For some writers, that's a piece of cake. But not for me. I don't get to write full time. I also teach and mom.  Using the Magic Spreadsheet, I've built a strong daily writing habit over the past year or so, but not a 1,667 word a day habit. My current daily goal (outside NaNoWriMo) is a mere 550 words a day. And those can be hard fought on any given day.

Still, I had an idea for a new novel that had been pulling at me for a few weeks. And I'm crazy. And some of my friends were trying it, so I thought I'd try it, too.

For writers like me, NaNoWriMo is marathon running from whatever chair you sit in to write. Athletic. Inspiring. And, for most of us, not sustainable in regular life. It's something you do once, to show that you can. Or maybe yearly to show you still can. It's not business as usual.

I didn't start out really believing I could do it, but I thought it was worth the effort even if it merely goaded me into writing more than I normally would have in one month's time. But Magic Spreadsheet proved that gamification is a very effective way to get Samantha Dunaway Bryant to do something. I guess I have my father's love for measurable signs of efficiency combined with my mother's love for small treats and prizes. The further I got, the more important it became for me to finish. And finish I did! Yesterday. A whole day early, even! 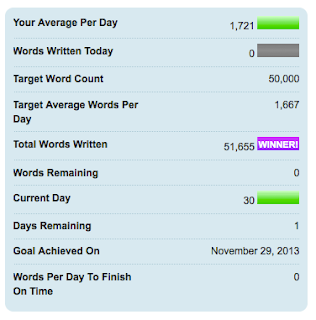 I found I was ridiculously motivated by the statistics and charts. Even when I was tired and frustrated, I'd push through to keep my bars alone the line. I'd pep talk myself. "You can do it, Dunaway" (I still call myself Dunaway when I'm pep talking myself, though I've been Bryant for more than seven years now). "It's only three hundred more words." 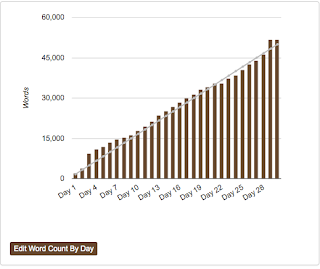 It was entirely different than the way I usually write. It forced me to keep on going even when I felt I didn't know where I was going. It forced me to just highlight areas that I'd have to research for later, or make notes of questions I was going to have to answer.

My novel critique group friends can testify that generally speaking, I keep what I write. Some of my writing friends write pages and pages and pages that don't actually make it into the final project. Not so for me. Usually, by the time something is committed to paper (or Scrivener, in this case), I'm committed, too. I might alter it, expand it, or rewrite it, but it's rare that I just cut something entirely.

I'm curious if that will hold true when I go back to finish (50,000 words did not get me to the end of the story, and I'm still not at all sure how this particular story will end) and edit this one. I'm going to put it away for now. I need to do the rewrite on Going Through the Change, now that it's been through critique group, so that's my December project.  Plus, I've found great benefit in letting something sit for a little while and coming back to it with fresh eyes.

That's something that was lost in this pellmell headlong tumble down novel mountain we call NaNoWriMo: time to let it sit, let it breathe like fine wine. It remains to be seen if what I created is worth drinking.

So, was it worth it? Unequivocally yes.

50,000 words in one month is an accomplishment I feel proud of. Not letting myself sit and think or research turned the story back on itself, making me let the characters lead and show me what they would do.

Is it my new M.O.? Unequivocally no.

Especially in the last few thousand words that I wrote, I really felt I was flying blind. If I was respecting the process and not just feeding into the game, I would have stopped and read some more about women's forays into the workforce in the 1930s, instead of floundering around trying to write scenes for my character based on the very sketchy knowledge I have of the time period.

Freda was whispering in my ear that I had a lot to learn about the time period. I didn't even have her wearing the right shoes!

There's a difference between necessary research (lines of work open to women in 1930 in Indianapolis) and letting myself get distracted by interesting research that still matters but only in details that can be added afterwards (what kind of shoes she would wear). NaNoWriMo has helped me learn the boundaries between those, and keep myself focused on the task at hand with iron concentration. That will serve me well in my future projects and help make me a more efficient writer.

Efficiency is going to matter. Unlike my mad scientist in Going Through the Change, I'm not getting any younger. And I still have a lot of stories to tell!

Posted by Samantha Bryant at 10:18 PM No comments:

Chuck Wendig is one of my favorite writing-bloggers.  For the next few weeks, he's got some of us playing a game of Telephone.  A writer puts out a story starter of 200 words (Here's mine from last week); another writer picks up where s/he left off, adding the next 200 words. I picked a piece from Wanderer. Here are her words:

Easy Street
Marcel was certain that the pounding beast in his chest was audible to the entire city as he leaned, panting, against the wall of the alley. Just out of sight, back in the blistering sunlight, the city rumbled on; he could faintly hear the ding of a trolley and the clackety-clack as it thudded over the iron tracks and the intermittent sounds of a saxophonist hawking his street-corner jazz to the tourists. Marcel gulped in a mouthful of the heavy, still air, and slunk further into the shade. It was slightly cooler, but no less humid. New Orleans was seething in the heat, oozing the smell of baked concrete, creole cooking, and the faint tang of the murky Mississippi from every pore.
Marcel wiped the sweat off his face with the back of one shaking hand, noticing the way the moisture slicked his dark skin—like the flickering mirage off asphalt. He leaned over and vomited, the acidic contents of his nearly empty stomach splattering the alleyway. He coughed at the acrid taste of his own fluids and scooted down the wall, slouching down until he sat on the pavement. He gripped his head in his hands.
It’s all over.

It began as such things do, innocently enough.  Marcel woke in an amorous mood and his thoughts had turned to Elise. Elise had flitted through his thoughts often since he met her a few weeks earlier. Each encounter was more fuel to fire growing between them. But for some reason he hesitated to act on his attraction. Hesitation was unusual for Marcel, especially in the bedroom.

Now Marcel wished he had listened to the still, quiet voice that told him that all was not as it seemed. But, this morning, he had thought only of the way Elise's hair had brushed across her bare shoulders, pulling his eyes and his mind across her flesh. Not giving himself time to think, he called her.

He could see now that Elise was trying to tell him not to come over, to warn him away, but, at the time, he thought she was just playing hard to get, that she wanted him to work for it. He had been so stupid. Now the thought of Elise's flesh was enough to make Marcel sick again. There had been so much blood.  He let his head fall back against the alley wall, his mouth full of the bitter taste of vomit and fear.


Posted by Samantha Bryant at 3:32 PM No comments:

So, Chuck Wendig is having an interesting Flash Fiction Challenge over at terribleminds.com. The idea is to write 200 words, then next week take someone else's 200 words and run with them, then someone else's, etc., etc. until we've all gotten through the holidays and ended up with 1000 word stories.

I'm intrigued. So, here's mine. It's 268 words. I suck at sticking to specifications apparently. I'm interested to see where it goes.

______________________________________________
It was some time before she could think of him without bitterness. Longer than it should have been, probably.  After all, their time together had been short.  But Alina knew that the impact a person had on your life was not necessarily measured in time. Her father, after all, had nearly twenty years to impress himself on her soul, and, in the end, he didn’t matter. She barely blinked when he died.


But, the boy.  He was different. She had spent only a few hours with him at the retreat. She hadn’t even gotten his name. He had introduced himself as the son of one of the trainers. He hadn’t given his name or asked for hers. That hadn’t bothered her at the time. It had felt like a beginning. She was sure they would have plenty of time to learn the details of each other’s lives.


He hadn’t acted like he knew who she was. That was lovely. Was it possible that he really didn’t know who she was?  He had just talked to her like she was a girl. He had asked to share her table, offered to fetch her a hot cocoa, which she refused.  He had complimented her drawing, talked about the walking paths near the lodge that he planned to walk the next day. It was the kind of conversation she had seen many times, but had never been a part of before.


She looked for him, of course, the next day.  And the day after that. Part of her watched for him the rest of the retreat week. But, he never reappeared.
Posted by Samantha Bryant at 11:39 AM 4 comments: