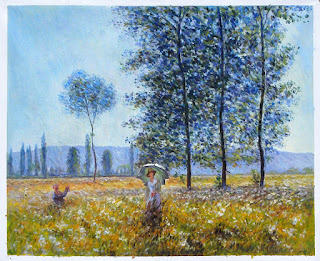 The new season of Wording Wednesday has begun. Fellow author Andy Brokaw collects a set of prompts and puts them out there for the world to use for inspiration. This season, the theme is weather and we begin with the impressionist artwork Sunlight Effect Under the Poplars by Claude Monet. Check out the links and play along if you'd like, or just enjoy reading.

These mornings with Helene were heaven on earth. Away from everyone else, if only for an hour or two, Giselle and Helene could pretend they were still just girls, free to wander open fields expecting nothing but beauty and receiving it openly. The light on the tall grasses and flowers bloomed in Giselle's chest like hope, buoying her despite her troubled mind. Helene's skin glowed, as it had when she was young and would let down her hair so the wind could ripple through it. She used to say it felt like flying.

Their lives had gone in very different directions since childhood. Always the beauty among their group of friends, Helene had married a wealthy man despite her lowly station. He had swept her away, taking her to Paris, Rome, and Ithaca, all the places they had read and dreamed about over their schoolbooks. Her letters praised the scenery and said little of the man himself, which was commentary enough for Giselle to understand.

Life had not been a fairy tale for Giselle. Her father died suddenly when she was twelve, leaving her family in desperate straights. She'd gone into service, which allowed her to earn a little money and help keep her mother and younger siblings in food and shelter. That had been the end of her schooling and any dreams she'd fostered of a better life. On bad days, she resented it bitterly. On good ones, she was thankful that she'd at least had an option to help.

After her fifth child in as many years, Helene's health failed her. She'd never been strong, not in body, though her spirit remained robust. The doctors hoped that fresh air and exercise would enable her to recover, but anyone could see she was fading. Helene, ever a loyal friend, had taken the opportunity to bring Giselle with her as her companion, to get away from the drudgery of the city and into the light of nature again. They both knew it wouldn't last.

It wasn't right, getting her friend back just so that she could help her die. But for an hour or two, whenever the light shone, they could be girls again, pretending the future stretched bright before them. It would have to be enough.
Posted by Samantha Bryant at 6:00 AM