My younger daughter and I have taken on a little project: we're watching all of the animated Disney films in chronological order and looking at how story and animation changes over time. You can read the first installment about Snow White and Pinocchio here. 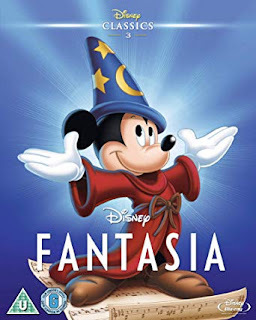 I had more exposure to classical musical as a child than was average for those around me. My beloved grandfather was a fan, especially of Wagner and Beethoven. You know how some kids sneak into the back of movie theaters to watch movies without paying? My grandfather, as a boy, snuck into the back of Music Hall to listen to opera and classical music.

I also took dance lessons. My parents hoped it would make me less clumsy, and I did enjoy it even though I didn't have much talent. Later, I was in the band and the chorus. All that is to say that I liked classical music more than many children around me, so the classical aspect of this film was not a hard sell for me, even then.

My younger daughter isn't particularly a classical music fan, but she appreciates music and animation in combination and does listen to quite a bit of instrumental music on her own.  She was quite open to giving this film a chance, and remembered the Mickey Mouse sorcerer part from Fantasia 2000, which we watched kind of a lot when she was smaller.

For both of us, one of the oddest aspects of Fantasia were the bits between pieces. We were tempted to fast forward the man talking to us about the music (Deems Taylor) to get to the "good part" where we actually hear it and see what the artists did with it.

Program notes are tricky beasts. Classical programs always seem to want to combine education with entertainment, and the audience overall does seem to want that background about the composers and the times they wrote in. Neither of us found these particular program notes all that engaging though. The bit where Mickey came out and shook hands with the conductor was cute and charming. The bit where the musicians randomly knocked over their own instrument was weird. The rest was utterly forgettable. In fact, I don't actually remember anything said during this part now.

I guess the program notes were intended to add some gravitas? To make sure we didn't feel the serious music was disrespected by the animated interpretations? I don't know. Maybe it's a product of its times. It was 1940 and I'm watching in 2019. I think I'd have left this part out and just put in a title slide letting me know the name of the piece, the composer, and when it was written.

"The Sorcerer's Apprentice" by Paul Dukas is still the most memorable piece in the collection. Perhaps this is because it has a plot, whereas most of the others don't really tell a story, or maybe it's because of Mickey Mouse. It's beautifully matched to the music and Mickey is sympathetic as the apprentice looking for a shortcut for his labor. My daughter was as charmed by those relentless water-hauling broomsticks as I had been as a child, and it ends on a cute laugh where Mickey is punished by the scary wizard, but in a "get out of here, you scamp" way which is a relief of tension.

"Tocatta and Fugue in D Minor" by Bach, the opening piece, probably did the least for either of us. It morphed from live action images of the orchestra into increasing abstract images. My daughter--the visual artist of the two of us--admired the moment of transition, noting that at some points it was difficult to tell if something was real or drawn, but I was impatient. It doesn't help that I'm not particularly a Bach fan, so the music didn't pull me in either. 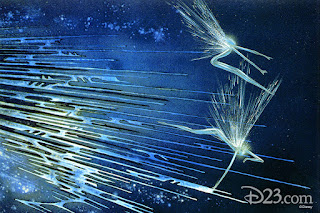 "The Nutcracker Suite" by Tchaikovsky is by far the piece of music we both know best. Thanks to the popularity of the ballet, that score is etched into our brains. This one must have made an impression on me when I was a child, because it hit with a rush of nostalgia, especially the long-legged fairies the dancing mushrooms.

My daughter was especially charmed by the Russian flower people section. Overall, we both enjoyed this section immensely for the way it reinterpreted the music while still referencing the familiar and popular aspects of the ballet.

"Rites of Spring" by Igor Stravinksy or "the dinosaur part" as children remember it reminded me of Bambi. The part where the spike-tailed dinosaur fights for life and loses it to the T-Rex (who has larger "hands" than are usually depicted, which made him even more terrifying) was heartbreaking, with all the other dinos hiding in the greenery and watching him die. Disney really loves to get gruesome in its pathos sometimes.

My daughter's highlight in this part was the pterodactyls (who were pretty scary looking too) getting their comeuppance for torturing the squid they'd captured by losing one of their count to the large-jawed sea creature. It suited her sense of justice. 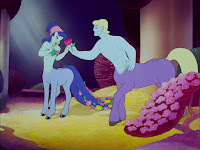 "The Pastoral Symphony" by Beethoven, in contrast, was so pastel-romantic that it was funny. The plot of this one involves little cupid babies trying to get centaurs and "centaurettes" (I kid you not: they actually called them that in the intro) together for a little spring romance, then everyone being attacked by Zeus with thunderbolts for a while. Oh yeah, and the bit with a chubby comically drunk Dionysus.

Now, my daughter is into Greek mythology. She's a fan of a Red from Overly Sarcastic Productions on YouTube (whom I also really enjoy! She's witty and sarcastic and unapologetic in her interpretations and opinions). So, my girl was a little startled by this portrayal of the gods, though she thought Zeus randomly throwing lightning at people because he was bored was very on-brand. He's such a bro-dude.


I was more taken aback by these simpering, beauty-obsessed female centaurs. (Not that the boys did much either--they seemed to mostly mope about hoping one of the girls would notice them, or jump around athletically). In my first piece on this project, I talked about my ambivalence about Disney, some of which stems from portrayals of female characters. This is some of the kind that bothers me. Every Centaur girl was so passive and sweetly docile. How about just one with a little moxie?

Still, the art was idyllic, soft and pretty. And Zeus definitely looked like a jerk for attacking their party with lightning for no clear reason.

"Dance of the Hours" by Amilcare Ponchielli didn't sound familiar until we got to the bit that was stolen for "Camp Granada," but I did remember the dancing hippos fondly. This one was clearly meant to re-engage the younger children who might have lost interest during the pastoral languor. We have ostriches, hippos, elephants, and alligators dancing ballet. It's cute and funny. Watching, my daughter and I were a little confused as to the intentions of the alligators. Did they want to eat the hippos or date them? It seemed a bit of both.

"Night on Bald Mountain" by Mussorgsky was a surprise. Chernabog the demon/devil dude was pretty darn dark and scary looking. I recently read a book about Milicent Patrick, an artist who worked on this segment and later went on to create the Gill-man, my favorite old movie monster and I thought about that while I was watching, wondering what parts she'd been responsible for. 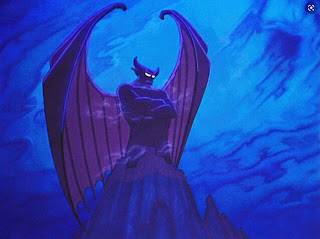 My daughter often creates demon OCs (original characters) in her sketchbook (though hers are usually cute-creepy rather than large-scary), so she sat up and took notice during this part, too. She ooo-ed and ahh-ed over the imagery of his drawing ghosts out, skeletons and ghostly figures swirling through the air.

We were both struck by the effect of the church bell sound on Chernabog. Such expression on his face! The animation work is just amazing here. In fact, there's much that I've seen echoed in later animations: the use of light to indicate power, the body language, the shapes of wing and face. From Gargoyles to Maleficent, lots of future Disney scares seem to have found inspiration in this demon character.

I confess that the Ave Maria that ended the piece put me to sleep, though. In part, this is because I was a tired mother at the end of a long day, resting under a cozy blanket on the sofa. In part it was just so soothing, both the music and the animation of the souls walking into eternity, which is apparently a beautiful wooded landscape with gorgeous bridges, reflective waters, and elaborate gateways. I missed the last two minutes because I had literally drifted off!

My daughter laughed at me, but confessed it had left her feeling sleepy, too. So, I'm not sure what to make of that as an end note.

Since this piece contained so many different stories and styles, it's hard to compare to the single-character-arc stories of Snow White and Cinderella. It's just too different a critter to compare easily.

An interesting aspect of any anthology piece like this one is the effect of the order of the pieces: knowing what emotion to draw in your audience with and what to send them out with, when to up the tension and when to throw in comic relief or something else to calm the audience. Fantasia is beautifully paced for the most part in this way, balancing the different pieces. It's still so well worth viewing!