T is for Time: A to Z Blogging Challenge 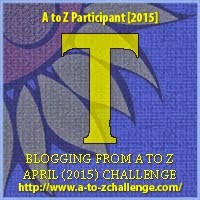 You hear a lot about how slowly the traditional publishing world moves. It's been described as glacial. It's a source of frustration, especially for eager new writers who are anxious to get their words into the hands of readers.

So I thought I'd share some details of the how much time went into the creation and release of Going Through the Change. For me, from conception of the idea to a book you can now buy (!) was almost exactly three years.

In Spring 2012, I was struggling to finish the first novel I ever wrote (unpublished, His Other Mother, women's issues fiction). It's a dark story and it was emotionally hard on me to finish it.  So, part of my brain was trying to escape, and I came up with the general concept and some rough character descriptions for a superhero novel, escapism at its best. I filed them away and used them as a bribe to myself to make myself finish that first book.

In July 2012, I finished writing His Other Mother (that one took four years just for the writing of the first draft), and let myself start writing Going Through the Change. I finished the first draft in August 2013 (somewhere in there, I picked up my Magic Spreadsheet habit, which really increased my productivity). By the end of 2013, the book had been through my critique group and I had rewritten it. Keep in mind I also had a full time day job (middle school teaching) and a family during this time--there was only 1-2 hours per day I could get for direct focus on writing, often less.

I started querying it and submitting it in January 2014.  I won't make you suffer through the rejections and no-answer-answers with me.  The story ends happily with a book contract from +Curiosity Quills Press in August 2014. CQ had a really quick process. From my initial submission to my contract offer was only a space of about two weeks.

Since then, we've been working steadily on edits, cover art, marketing plans, etc. All the behind-the-scenes stuff that makes my book as beautiful and polished and perfect as it can be.  So, here we are on BOOK RELEASE DAY! It's been nearly three years to the day since I thought up the idea. In traditional publishing, I'd call that speedy-fast-quick!

Blogging A to Z is a great opportunity to connect with some excellent bloggers and interesting people. I encourage you to check out other participating blogs, too!