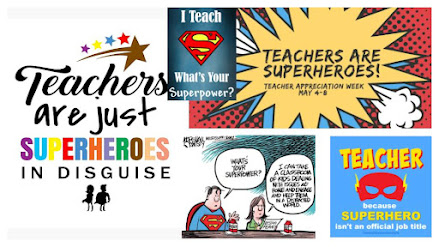 It seems flattering at first blush, being called a superhero.

It implies that I'm special, someone who handles work that an ordinary human would not be able to do--jobs that require super-human strength, endurance and effort.

But the problem with that overblown, hyperbolic, and manipulative rhetoric is that teachers aren't superheroes. We're people.

Don't get me wrong. I'm an amazing person. I can do more with 90 non-supervisory minutes a day than some people do in entire eight hour work days. I'm a master of efficiency, and surprisingly good at improv, too, given how often the rug is pulled out from under me mid-stride. Many of the teachers I work with are as amazing as me. Some are even MORE amazing.

But, they're not superheroes. Neither am I. I'm just a middle-aged woman who's fed up with this particular method of dodging discussion of real issues.

I know superhero imagery is appealing, and has become a favorite metaphor for lots of overworked, underpaid public servant sorts of work. But a lot of the people using this comparison don't know superheroes.

I, do, though. I read, watch, and write superheroes. I know them well.

And here's something we all need to remember:

Real heroes exist. Some of them are teachers. But superheroes are imaginary.

Only imaginary heroes can shoulder the load alone, out of the goodness of their hearts, with no thought of reward or rest. Superheroes don't need help from ordinary folk. They don't need things like reasonable workloads, safe working environments, a living wage, or even our respect.

But if society can cast teachers as superheroes, it lets the rest of the people off the hook. We don't have to make any sacrifices for the public good, like paying higher taxes so that students can learn in buildings that aren't falling apart, or paying teachers enough money that young, passionate, talented people might be attracted to this line of work. 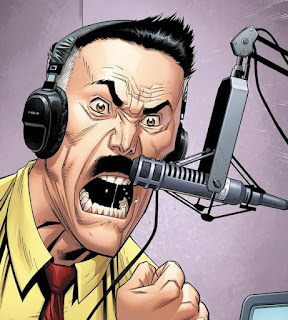 When I am called a superhero, I remember James Jonah Jameson, editor of the Daily Bugle, the angry spittle-flinging man ranting about the ineptitude and untrustworthy nature of the very superheroes who continue to save his butt and the butts of all the ungrateful citizens of imaginary New York and the world beyond.

Superheroes *do* get thanked from time to time, mostly in moments of crisis like alien invasions and such.

Real heroes get thanked under similar circumstances, like a teacher throwing herself in the literal line of fire when another problem society ignored too long walks through the front door with a gun, or dying during the pandemic because they went to work in person despite the risk "for the kids."

Remember those five minutes at the start of the pandemic when parents all over America realized what a teacher's job actually was and expressed gratitude?

If teachers stumble--regardless of why (or even if they don't stumble, but someone manages to spin the story just right)--those teachers we were just praising as superheroes are suddenly on the front page again, but this time as the recipients of blame, anger, and ire. We're called selfish or incompetent, accused of indoctrinating students when we try to teach them to think for themselves. All from people who have never done our jobs (and honestly probably couldn't handle the job if we got them to try it).

So, instead of throwing empty compliments like "superhero" at teachers, how about working to increase the likelihood of success? Remember that teachers are ordinary human with ordinary limits. If the job truly requires a superhero, no wonder we're going through a giant teacher shortage. Superheroes don't exist and ordinary people trying to be superheroes can die trying.

I don't need flattery, and I'm not accepting more than my share of the blame. Instead, I want to see a world where success is possible and the work is sustainable. It's possible . . .it's just expensive. America has gotten off cheap on education so far, and we're starting to see the truth in "you get what you pay for."

But, for now, what I really want to say is: take that cape and shove it.

Posted by Samantha Bryant at 10:00 PM