Wording Wednesday: Arcachne and Her Sisters 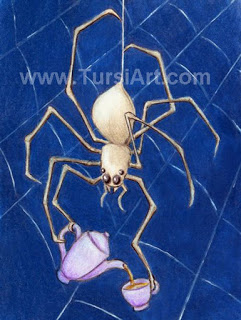 For Season 3, the theme is creatures and this week's inspiration is a friendly arachnid by Rose Tursi, whose work can be found at: www.tursiart.com My post from last week can be viewed here.

The nicest thing about having been transformed into a spider was all the extra limbs. All eight of her appendages were dextrous and agile, strong and useful for a variety of tasks, from weaving to climbing.

The worst thing had been the revulsion. Arachne couldn't really blame her sisters for their reactions. She had once felt the same way about spiders, skittering, skulking creatures watching you with far too many eyes. When her sisters returned to their chambers and found her clinging to the massive glittering web she had constructed in her first few hours as a spider, the screaming nearly brought down the house.

Luckily, her youngest sister, Alethea, had witnessed the entire contest with Athena and was able to keep their eldest sister, Ademia, from squashing her with a shoe. Ademia still screwed her face up like she'd been eating lemons every time she looked at her once-favorite sister, but she left Arachne in peace, so long as she constrained her weaving to designated areas.

The webs she wove now put her earlier creations in tapestry to shame. Thread was so thick and clumsy in comparison to spider silk. And she could work so quickly!

Alethea had been such a dear, waiting patiently while Arachne wove her messages in webwork and doing her best to get the things that her sister wanted for her happiness in her new life.

Only today, she'd managed to find the tiniest of teapots and to assist Arachne in brewing lemon olive tea. Drinking it was almost like being human again.
Posted by Samantha Bryant at 5:08 PM