The awesome co-hosts for the October 2 posting of the IWSG are Ronel Janse van Vuuren, Mary Aalgaard, Madeline Mora-Summonte, and Ellen @ The Cynical Sailor! Be sure to check out what they have to say, too.

This month's question: - It's been said that the benefits of becoming a writer who does not read is that all your ideas are new and original. Everything you do is an extension of yourself, instead of a mixture of you and another author. On the other hand, how can you expect other people to want your writing, if you don't enjoy reading? What are your thoughts?
__________________________________ 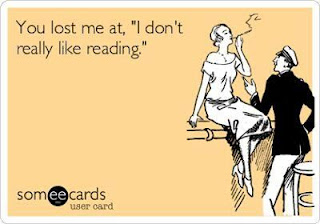 Okay. I don't take many hard stances in my life.

I know that nearly every circumstance is smeary and gray in the boundaries rather than crisply clear with lines delineating "good" and "bad."

Ambiguity is where the interest lies, in life and in fiction.

But here, I draw a line. A firm, bold, uncrossable line.

Reading is the number one best method to improve your craft, and every writer I've met who has told me they don't read has disappointed me on the page if I got that far.

Generally when I meet a writer who tells me they don't read, they spend a lot of time talking about other kinds of story: film and television mostly.

Film and television are lovely. I enjoy both a great deal, given the time.

But they are not books and if you are trying to write books that are like film and television, you are ignoring the bulk of the magic, limiting yourself to visual, cinematic view and losing out on all the other senses, and interior life. 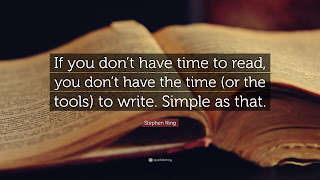 As for the argument that not reading means your ideas are new and original?

Not reading just means you're influenced by non-literary things (film and television, mostly).

Unless you go full-on hermit and shut out the world entirely, you are a human moving through the world and are influenced by it.

There's no purity of vision to be had, immaculately contained in a bubble of only your own making. We're all made of and by our experiences, both literary and other.

Lulls happen. Everyone has to find their own process.

But not reading at all?

Sometimes I miss the way I read before I was serious about my writing. It was easier to lose myself in the world and not analyze what the author was doing while I read. But that doesn't mean I'd ever give up reading! When I *do* get that truly immersive feeling, I know I've found a wonder of a book because it made it past my writer-vision and got all the way to my underlying story-loving brain.

What do you think, friends of the internet? Do you have an example to prove me wrong? A writer who doesn't read but still writes compelling fiction themselves? I'd love to hear form you in the comments.