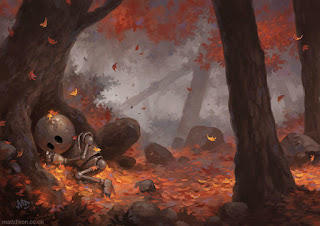 The new season of Wording Wednesday is underway. Fellow author Andy Brokaw collects a set of prompts and puts them out there for the world to use for inspiration. This season, the theme is weather and we continue with the "A Matter of Time" by Matt Dixon. It is part of his "Transmissions" line, which you can see more of at https://www.mattdixon.co.uk/. Check out the links and play along if you'd like, or just enjoy reading.
You can check out my previous posts from this season here: Cloudy, Clear, Sunny, Rain
______________________________________

Red leaves blew across the forest floor, spinning into eddies and dancing their way in and out of patches of sunlight. No one admired their graceful flight. It had been a long time since anyone had, but leaves need no audience to bring beauty to the earth.

The trees had grown tall in the undisturbed forest, their limbs strong, their branches long and reaching. They groaned when the breeze became forceful, bending gracefully in the gust, but keeping rooted deeply in the quiet earth. They would stand for quite some time yet. Trees do not find it lonely to grow side by side under an empty sky.

One of the trees had spread wider than the others, its trunk shaping itself around a small metallic man, curled there as if he slept. Of course, he didn't sleep. He was dead--at least as dead as things that were never quite alive can be. No animating power was likely to move his slender arms or light the dark holes that had invited interpretation as eyes.

The creatures that made him were long gone, and he lay cradled in the hollow space, protected from the worst of the rains, looking much as he had when he first lay down, though it had now been many seasons. He had been made of sturdy materials, dug from the earth and formed into this shape, practical for his role as servant to his creators.

Perhaps somewhere, something observed, grieving for what had been, but the trees feel no sorrow, for they have all they need.
Posted by Samantha Bryant at 8:39 PM