My youngest daughter is even *more* into Halloween than I am, so we are both so gleeful the entire month that it's a wonder the rest of the Bryants can deal with us at all.

One way we're enjoying is by watching Halloween movies. We're on a Tim Burton kick right now. His aesthetic is right there in that middle ground between whimsical and disturbing…which could probably describe us as well (though there's less mascara and lace involved for us). She's already seen and loved The Nightmare Before Christmas, Pee Wee's Big Adventure, Beetlejuice, 9, Charlie and the Chocolate Factory, and Alice in Wonderland. I'm planning to share a few more Burton favorites with her across the season.

But, the youngest Bryant had never seen The Corpse Bride (at least not that she can remember), so we kicked off our season with that.  I found it slower than I remembered (thought still good), but she really enjoyed it.

My take: I had forgotten the lovely wedding vows. Really some of the most romantic ones I've heard. It was also very sweet how the two misfit children whose families were trying to use them for social gain actually had a connection and some hope of making each other happy in the end. A more romantic story overall than I remembered.

Her take: She loved Scraps, Victor's dead dog (who reminded her of Zero from Nightmare Before Christmas), but agreed with me that the Peter Lorre aping worm was grosser than funny. She knew almost from his entrance that Barkis Bittern was going to turn out to be the long lost "love" of the Bride. Kids these days, so steeped in tropes it's hard to surprise them. 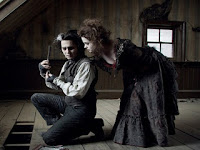 Next we tried on Sweeney Todd.

I fell in love with this musical as a college student, listening to the Broadway recording with Angela Lansbury as Mrs. Lovett and Len Cariou as Sweeney. So, when this movie version was announced, I was hyped. I was pretty sure the youngest Bryant would love it too.

My take: Visually, it's quite a treat, gritty and atmospheric. I quite enjoyed Helena Bonham Carter's Mrs. Lovett both in singing and acting, and she has great onscreen chemistry with Johnny Depp. Johnny's Sweeney was better in visuals and speaking than singing (I loved the way he held his jaw--so stiff, seething with suppressed emotions). He was "not bad" on the singing. If I didn't already know the music as voiced by Cariou, I might have liked his take better (much like I felt about Hugh Jackman's Valjean) . The best moment in Depp's performance, in my opinion, is when Todd snaps the rest of the way and goes from wanting specific vengeance to decide that "they all deserve to die."

Her take: She's becoming quite a Sondheim fan, having been enamored of Into the Woods for a year or two now. She loved the lyric complexity. She wasn't as sure about the obviously fake over-red blood for the gory scenes. She said it pulled her out of it too much, but she conceded it might have been "too horrible" if the blood had looked realistic. We agreed at the end that poor Johanna and Toby were damaged for life by the trauma of having wandered into this story.

Next up, I'm planning to show her Edward Scissorhands and Sleepy Hollow, both of which I enjoyed when they were new and haven't really seen since. My girl likes Winona Ryder, both in Stranger Things and in some of her younger roles (Heathers, Beetlejuice), so I think she'll enjoy them.

Any other Tim Burton fans out there? Which ones are your favorites and why? Any that you don't recommend?
Posted by Samantha Bryant at 6:00 AM