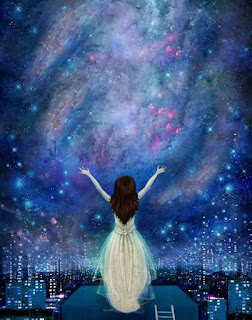 The new season of Wording Wednesday has begun. Fellow author Andy Brokaw collects a set of prompts and puts them out there for the world to use for inspiration. This season, the theme is weather and we continue in week 2 with Kissed by Starlight by Lisa Falzon. Ms Falzon's works can be found at https://lisa-falzon.com/. Check out the links and play along if you'd like, or just enjoy reading.

Ashley wasn't enjoying the prom. She'd been so happy when Will had invited her--he was a handsome boy, well-liked, and having garnered his attention had made her the envy of many other girls. She hadn't experienced that very often, and there was a windy rushing sort of feeling in her brain that left her a little breathless when she considered it. He could have asked anyone, but he'd asked her and others had noticed.

Her mother, too, had surprised her with her willingness to let her spend so much on the golden confection of a dress they'd chosen. "You only have the one junior prom," she'd said, winking as she handled the clerk her credit card. The gown made her feel like a princess, as had receiving a corsage from Will and being guided to the fancy car he had borrowed from an uncle for the occasion.

But the dance itself was dull.

Will didn't want to dance, except to press her to him during slow songs, an experience that was far less romantic than she had imagined and smelled more of cologne over sweat than she'd have liked. She'd joined in a few dances with friends, but the music was not really to her liking and the noise and lights made her head hurt. Even if she and Will had known each other well enough to have something to talk about, conversing was limited to yelling short sentences over the pulsing base and smiling to cover the fact that she hadn't been able to understand what he said in return.

The hotel where the prom was being held overlooked the city and Ashley spent some time staring out the floor to ceiling windows at the lights below and the reflections of the lights behind her. Finally, she excused herself to find the bathroom, relieved to lessen the noise for a moment behind a couple of doors. When she came back out, she spotted another door in the hallway beyond the bathrooms. A small sign read "Roof access."

Ashley expected to find the door locked, but she tried it anyway and to her surprise, the handle turned in her grip. Peeking back over her shoulder and finding no witnesses, she made her escape, darting up the stairs before someone could notice and call her back. At the top, she burst out the door into the night air. Wind whipped her skirt around her legs, cooling her skin.

No strobe lights or decorations lit the roof, but she could see clearly by moon and city light. Lifting her skirt to avoid soiling it, she crept to the wall and leaned over, dizzied by the view. When she raised her gaze to the horizon, it glimmered before her eyes, the glow of the city below combining with the remnants of sunset into a colorful swirl. She spun with the joy of it, arms flung into the air.

Now, this was dancing!
Posted by Samantha Bryant at 6:00 AM