Welcome to the October Frights Blog Hop! I'm Samantha Bryant. If you visit here regularly, you already know that I'm a Halloween fan (if you're new here: Welcome to the Madhouse!).

Last year at this time, I posted a blog series on 31 days of Halloween. My *favorite* thing the past few years though, has been #nightmarefuel

The Nightmare Fuel Project is the brainchild of Bliss Morgan, a talented friend whose work you should definitely check out!

Each day in October, she posts a creepy picture prompt and invites anyone who wants to play along to create something macabre or magnificent and post it for the group to enjoy. This is my third year playing along, writing creepy flash fiction each night in celebration of spooky season.

Here's my favorite of what I've written so far this year. You can check out all my creepy flash fiction for the project on my Facebook page. 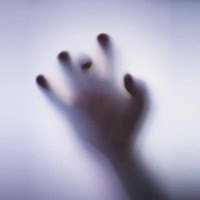 Jimmy’s room wasn’t really a room, it was more like a partition. His mother had found some smoky plexiglass somewhere and used it to divide the space into two tiny bedrooms, each barely big enough for the bed and a narrow chest of drawers that was also the desk and the nightstand. It wasn’t much, but it gave him and his brother a little illusion of privacy, something that mattered more now that his brother was older.

Jimmy had to pretend he didn’t hear a lot of things these days, especially if Mom wasn’t home. He’d never tell, of course. Brothers didn’t rat on each other, even if the girls were mean or the smoke smelled weird.

But he missed the nights when Jack would turn a light on the plexiglass wall and make shadowpuppets for him or press his face against the wall smooshing it comically and getting them both in trouble for wild laughter.

Laying on his bed drawing, Jimmy heard a tap on the glass. He jumped. He hadn’t thought Jack was home. He looked over his shoulder and saw a hand laying against the glass. He laid his own over it on his side of the wall and Jack spread his fingers wide so Jimmy could compare the size of his hand to his brother’s. Jack was almost ten years older than Jimmy, so catching up was taking a long time, but he felt sure his hand was bigger than it had been the last time. Pleased he knocked three times, their secret signal for happiness. Jack didn’t respond.

The hand moved away and Jimmy went back to his drawing. The cat-man he had invented was having an undersea adventure this time and Jimmy was having a hard time getting the bubble helmet to look the way he wanted to. After a few tries, he threw the wadded up paper at the wall in frustration.

There were two hands on the wall now, pressed flat enough that Jimmy could trace the lines in the palms. Jack was pushing hard, like he wanted to come through the plexiglass wall instead of climbing over his bed to get to the narrow hallway like a normal person. The makeshift wall scraped against the ceiling, groaning like a train car. “Stop it Jack! You’ll get in trouble if you break it.”

The pressure released. Jack could be crazy sometimes, but Jimmy could usually get him to stop before it got too bad. Just as he was thinking about picking up his drawing again, the hands were back, clenched into fists this time and pounding against the wall, making it scrape and groan and shake ominously. Jimmy yelled “Stop it Jack! Stop it!”

At the foot of his bed, the door opened. “Stop what, Squirt?” Jack leaned in, still wearing his fast-food tee shirt.

“J-J-Jack?” Jimmy pointed at the wall behind him, wordlessly. The Other Jack still pounded the surface again and again and when Jimmy turned to look, he thought the fists might be bleeding. His mouth went completely dry.

Suddenly, Jack had him by the armpits and was pulling him out of the trailer into the chilly night, barefoot. The two of them got into the car and Jack was backing away, driving before Jimmy had even put on the seatbelt. “Where are we going?”

Jack didn’t answer him. He was on the phone, talking fast to someone, He said their address and said there was an intruder. He said he didn’t know where their mother was. He said other stuff, too, but Jimmy couldn’t understand--it was hard to hear over the squealing inside his head. Then, his brother was shaking him, telling him it was okay.

There were blue lights flashing and a woman with a flashlight and a clipboard. There was yelling and a loud bang. An ambulance that took away someone. Jimmy wasn’t allowed to see. Jack held him too tightly, kept Jimmy’s head pressed against his chest.

Thanks for reading! If you enjoyed, please check out the rest of my site to see what else I'm up to, or subscribe to my newsletter (no more than one email per month). I've got a collection of Weird Tales coming out at the end of the month! Stories from Shadow Hill is a series of weird and macabre tales that take place on the dark side of a suburban neighborhood suspiciously similar to the one I live in . . . Details will be forthcoming in my next newsletter!

Be sure to also check out Deadman Humour, my most recent publication. This creepy anthology is a collection of stories about what scares clowns. My story "The Gleewoman of Preservation" shows that there are things scarier than clowns in the woods near Preservation.

If ghost stories are more your style, you can read my daylight ghost story, "The Girl in the Pool" in Off the Beaten Path 3 from Prospective Press, alongside some excellent ghostly tales from other fabulous authors.

Remember to hop on over to check out the other participants' offerings as well.