Black Lightning has been on my TBW (to be watched) list for a while now and summer finally brought me a little time for TV.

I'm an easy sell: it's a superhero story about a character I didn't already know well, and he's not twelve--he's a full adult with experience, responsibilities, and something to lose. Three for three, with a bonus point for diversity. Right up my alley.

I'll be mildly spoilery at worst in this review. I wouldn't want to ruin your enjoyment by giving too much away. I've watched two seasons as I write this. 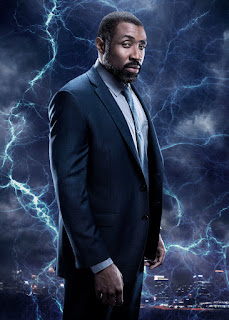 Such a beautifully complicated character. A community leader (high school principal with a high profile), who still gets pulled over for "driving while black" and has to manage racial politics with the Freeland school board (an awfully white organization considering the racial makeup of the community it's in).

It's all about control, of the situation, and of himself. Even when he's not being superheroic, he crackles with suppressed energy and channeled righteous anger. He's working within the system in one suit, and as a vigilante going around the system in another.

He's an involved parent, who still falls back on "because I said so" and "not under my roof" in frustration when his strong willed daughters reveal that they are definitely his children. It plays all too real to this mother of stubborn and amazing daughters.

He's not perfect (despite those abs and that smile), but he's working hard to make the world better, and not just when he's wearing the suit (either the coat and tie or the lightning). I can see why people call him "Black Jesus."

He loves his (ex)wife enough to have given up his superheroic pursuits at her insistence, and they have a push and pull magnetism on screen: still clearly in love and attracted to one another, united in their desire to raise their daughters well, but cracking under the pressure of heroism. That inner conflict about using your gifts when they hurt you personally adds serious tension.

It's hard to love someone who is constantly in danger and on call, to see them hurt and suffering because of the sacrifices they've made for strangers. Ask any spouse of a cop or firefighter or soldier or schoolteacher or other front-lines job.

Lynn Pierce, as played by Christine Adams is amazing. She knows her limits, and even when they hurt, she sticks by them. She's a brilliant doctor and scientist (and we later find out quite a fighter herself), fierce and dignified, but loving. No wonder her children are so much trouble. They're just like her. 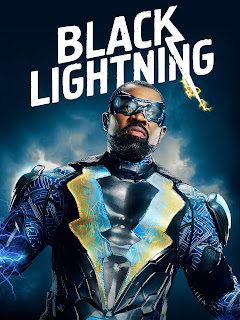 relationship (or any relationship at all), but the Pierces are close, despite the secret of Dad's former superheroic life having been kept from the children until the crisis that begins the television series brings him back into his lightning crested suit. (When the show begins, no one has seen Black Lightning for nine years--his daughters don't know about dad's side gig).

The first time I saw the Black Lightning suit, I wasn't sure what to think. It's pretty darn cheesy, with a bright chest panel. It made me laugh, I'll admit. The effects used for his lightning powers are on the cheesy side, too, which contrasts pretty starkly with the look and tone of the alter ego parts of the show.

Whenever Jefferson dons the costume and goes out to fight, the music shifts towards the seventies, too, with full-on swagger. I wasn't sure I liked that at first, but it's grown on me. It's a subtle way to show his origins, though if he's only been on hiatus nine years, he stopped fighting in the earlier 2000s, not the seventies. Still it resonates with shades of characters like Shaft and Luke Cage, which is probably what the designers were after.

When younger heroes (Thunder and Lightning) come onto the scene, the generational contrast is interesting: in terms of where the moral lines are as well as what to wear. I like how that contrast is used to show that younger people and older people both have things to learn from one another.

"Uncle Gambi," Jefferson's adoptive stepfather, has had quite an evolution across the two seasons as well. He's definitely more than he seems when we meet him, and he keeps getting more interesting. His relationship with the Pierces and his role in the history and the superheroics helps heal plot holes as needed.

The villains in this one are big and broad and stylized, though their overall motivations can be a bit fuzzy. Tobias Whale is a great gangster with an extra secret, though I find him a little one-note overall. He seems like a plotter with a huge overarching plan, but then those plans turn out to be kind of loose and not fully thought out when we get there. Still, the personal nature of the grudge between Tobias and Black Lightning is powerful.

Dr. Helga Jace is horrifyingly cold about any human (or metahuman) costs in her mad science work. She's a great contrast to Lynn Pierce. I'm looking forward to learning more about the mysterious and dangerous Agent Percy Odell. The secondary cast with Khalil, Grace, and police ally Bill Henderson have a lot of potential for future drama and intrigue, too.

If you're looking for a new superhero show to watch, this one has a lot to recommend it!
Posted by Samantha Bryant at 6:00 AM