The Orville Might Be the Best Star Trek Yet 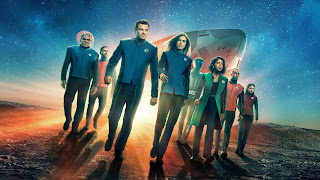 I recently finished watching the second season of The Orville. For those unfamiliar with the show, it's a Star Trek-esque space-based episodic story with some longer arcs in which the crew of a starship encounter adventures as they explore the universe.

Similar to Star Trek in all its iterations, the crew are part of a an interstellar alliance with military rankings and rules. Their mission is both political and scientific. It's a show that gets really mixed reviews. Even people who love it don't seem to love it without criticism. I think I'm the same: I like it, but I can't quite love it.

While I have enjoyed several Star Trek series in my life (the original series, The Next Generation, Deep Space 9, Voyager, the old movies, the newer movies), I've never considered myself a deep fan. Watching Orville helped me realize that this is because I don't connect strongly with most of the characters.

They tend to be static--arriving on the scene fully realized and ending the series no significant changes to the core of who they are. The tension on your average Star Trek show is all external. 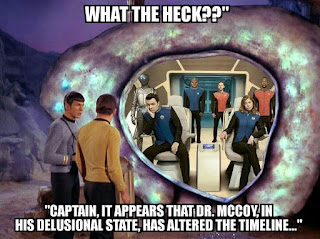 That's one way The Orville is different. Interpersonal drama is often as important or more important than external conflict in any given episode.  Throughout seasons one and two, we've watched a once-married captain and first officer figure out the parameters of their new relationship. We've watched a married couple become parents and discover deep-seated philosophical differences and cultural dissonances. We've watched several other characters foray into romance with varying results.

Fans might argue that these sorts of character arcs are seen on Star Trek as well, but for me, any such storytelling is solidly in the back seat in those shows. I like this more character-driven exploration of similar themes. These characters grow and change within the series more than I've ever seen on a Star Trek show. For me, that's the major selling point of The Orville: it's Star Trek, with more fully realized people in the roles.

I also enjoy the "ordinary Joe" feel of the characters. Among the people in my life, I can find people who are similar to Lt. Gordon Molloy, pilot and longtime friend of Captain Ed Mercer or Dr. Claire Finn, the ship's doctor who is also a single mother.

Competent and effective, but quirky, too. That's very different than giant icons like Jean-Luc Picard, who while wonderful, was too much a paragon to make stupid choices in love or leadership.

From the early days watching reruns of the original series with my mother, I've always loved the allegorical storytelling bent of Star Trek--exploring human issues with non-human characters offers contrast and comparison that an all-human cast has to work harder to achieve. 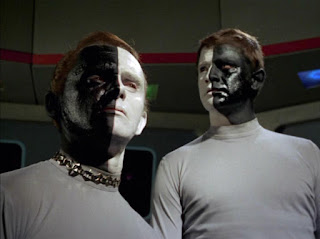 The Orville does this, too. There's emotion vs. logic in Isaac, the Kaylon emissary and science officer. There's exploration of the line between cultural respect and individual rights in the gender issues of Moclan, home world of Bortus, the second officer.

The discussion might be a little more subtle than it was when the black and white faced people of Ariannus refused to see each other's values (star bellied sneeches, anyone?), but the tactic is the same. And it's still a good one.

An aspect of The Orville I'm less fond of is the mixing of tones. Traditionally, Star Trek has had lighter toned and heavier toned episodes, but a single episode of The Orville may offer comedy and drama side by side, an effect I sometimes find jarring.

Individual episodes also suffer from inconsistencies and writer convenience sometimes (example: the fabulous warrior women who escaped Moclan to live life on their own terms and were skilled enough to do this suddenly lose all fighting and observation skills and need to be rescued by the crew of The Orville when the attack they've always anticipated finally comes).

All in all, The Orville captures much of what I love about Star Trek while shedding the baggage I didn't love as much. It's a love letter to the place the Star Trek universe holds in our hearts while also being its own creation. Worth watching.
Posted by Samantha Bryant at 6:00 AM