During the schoolyear, I watch maybe an hour of television a week, but in summertime (when the living's easy: and I'm not teaching), I sometimes watch two or even three hours of television in a single day. It feels like I'm flying through TV shows getting to watch them at that rate!

So, here's another peek into my summer viewing: Wynona Earp, season 3. "I told that devil to take you back!" 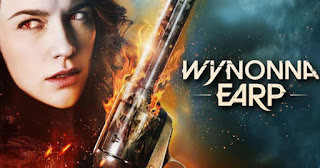 So, this is a show you have to approach with the right attitude.

If you're a viewer who wants accuracy (or even plausibility) and insists on consistent and well explained world building…watch something else. This one isn't for you.

But if you, like me, have a taste for pulpy badass fun? Then strap in. It's going to be a bumpy ride.

Your basic premise: There's a curse of the Earp clan, begun during Wyatt Earp's time which ties the fate of each generation's Earp heir to the endless battle of Revenants, demon versions of old west baddies who keep coming back every generation to fight the next heir afresh.

Wynonna is the latest heir and she's a hot mess, as in: she's hot, and she's a mess. She drinks too much, is a sexual adventurer, and is a shoot first and ask questions later fighter, all of which leads to high drama.

As played by Melanie Scrofano, I find her charmingly unconcerned with what anyone might think of her choices, comfortable in her skin even when she disapproves of herself, and steadfastly loyal to those she loves. She fights from the heart, relying on gut instinct and impulsive risks to save the day.

But my favorite character isn't Wynonna: it's Doc Holliday (yep: *that* Doc Holliday) conveniently immortal and recently rescued from imprisonment in time to wreak havoc on Wynonna's heart. Tim Rozon must be a man out of his own time, he plays the old fashioned Southern doctor turned gunslinger so perfectly for tone. He's as hot-headed as Wynonna herself and prone to epically bad decisions when his heart is wounded that only up the dramatic ante.

This is the kind of show where everything is blown out of proportion and the dial is turned up to eleven. I often have to pause to laugh out loud when the dialogue or situations take me by surprise. To my mind, this is perfect escapist summer viewing, satisfying and entertaining, always leaving me feeling distracted by very unrealistic troubles. Just what the Doc (Holliday) ordered.