My college-aged daughter has an eye for programs that don't seem like they're for me that totally turn out to be for me. It was she who got me hooked on Jane the Virgin, for example, which I never would have guessed I'd enjoy so much. So, when she suggested The Marvelous Mrs. Maisel, I knew it was likely to be right up my alley. I watched season 1 this spring, and season 2 this summer. 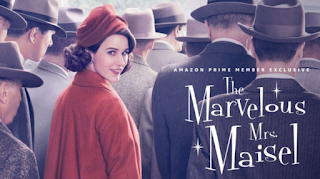 For fans of shows like Miss Fisher's Murder Mysteries, Mad Men, or Downton Abbey, you'll get that same feeling of having been transported in time. Miss Maisel's wardrobe alone is worth watching the show for. Her worlds, among rich Jews of the Upper West Side in the 1950s and on the comedy stages of the same era alongside Lenny Bruce, are not worlds I know much about, so I love the windows into something new.

But characters are always what keep me or lose me in a show (or a story of any kind). Like Miss Fisher (a show you should also watch if you haven't yet), Midge Maisel is a striking personality who doesn't quite fit into societal expectations for a person in her roles in that time and place. She's charismatic and I found myself rooting for her right away.

Mrs. Maisel truly is marvelous, just as the title claims. She's witty, on and off the stage. She's strong and independent, despite having been raised with expectations that she would never need to be either of those things and therefore having obtained very few practical skills. Relentlessly optimistic in the face of every setback and confident in herself at superheroic levels, but still empathetic to the plights of others. Strong female character in that true sense of personality rather than literal physical strength.

The juxtaposition of Mrs. Maisel's two worlds is the heart of the charm of this show--who would have thought that a woman of her background could make a success on the comedy stage? The culture clash between the woman whose hat collection wouldn't fit in my house and her much harder-luck manager is rife with thoughtful life lessons that don't feel like lectures. (The stage routines are hilarious as well).

Her relationships with the other comics and the relationship arcs for herself and her husband as well as that between her parents will resonate with a lot of viewers, even if your life experience involves a lot fewer matching shoes and handbags. Recommended viewing.
Posted by Samantha Bryant at 6:00 AM