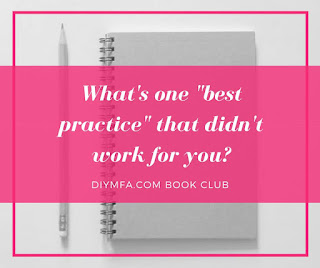 Creative process is as individual as fingerprints. Even people who use the same tool or structure don't do it the same way, not exactly. The DIYMFA book club question #5 is about best practices that didn't work for you.

As I've learned how my own process worked, I've tried a lot of different things. Some worked for me, some didn't.

Discipline: Most of the writing pundits out there seem to agree that you have to have discipline to be a successful writer. To some extent, I agree. For the first 30 or so years that I wrote, I was a hobbyist who wrote when inspiration struck only. So, I finished very little in all that time. Some poems, some essays, but none of my larger projects ever came to fruition. I'd lose interest before I got to the end.

So, I tried on a variety of advice:
Mostly, I found that this advice didn't fit in with the rest of my life. I suck in the morning, especially the very early morning which is when I would have to get up if I were the write "first" before getting ready for school (teaching, my day job, starts hella-stupid early). If I wanted to have friends and family, I had to be well rested.

Trying to write at the same time in the same setting every day is supposed to have a kind of Pavlovian effect, making words come to you because you've trained yourself to expect them at that time and in that setting. Didn't work for me at all. I've actually found that, if I'm stuck, a change (of setting or time or tools used) can get me unstuck faster than anything). Plus, if I wanted friends or family, I couldn't keep refusing every invitation that conflicted with my scheduled writing time.

And that "butt in chair" one. Dang it. I hate that as much as the "just stay in bed when you can't sleep" one. It works much better for me to get up and be active, letting my subconscious puzzle things over without me for a bit. A load of laundry or a walk with the dog and the blood would flow to my brain and let me get some words down, without the frustration of torturing myself for hours first.

Now, that's not to say that I didn't develop any discipline. Something that DID work for me was committing to writing every day a minimum of 250 words. I've written about that more extensively here. 250 words isn't a lot, but it does add up to a novel's worth of words over about a year if you do it every day. And even when I'm sick, exhausted, or not in the mood, I can struggle out that much.

Process: Everyone has ideas about how you should get your words down on the page and what you should do with them afterwards. They have recommendations about when to let other people see it, when to let yourself go back and make changes, etc. Mostly, the advice is good hearted, hoping to help you get to "the end" and not get hung up on perfecting the first three chapters (or first six lines, or first sketch) for the rest of your life. But, people do get awfully dogmatic about this part. 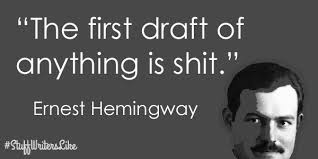 Stuff I've been told and tried:
None of that works for me at all. I write chapter by chapter, and I begin each day's writing session by reviewing what I wrote the day before and revising it. Sometimes that's MAJOR, like scrap it and begin again. Sometimes, it's line by line tweaking. Sometimes, writing means that I get an inspiration that changes something in an earlier chapter. I go back right then and add notes and sometimes even fully make the revisions.

I'm not an outliner, at least not usually. I am becoming a bit of a plantser (half pantser, half plotter) in that I sit down with a little spark of an idea and follow it as far as it will go, then sort of work out notes for what can happen in the next part. I guess, it's a piecemeal sort of outlining that has me stopping to sketch out the book a few chapters at a time. I usually don't know how my book will end until I've gotten more than halfway there.

I have a critique group that sees my work every six weeks in a variety of stages of completion. I've been with them for nine years. I've taken them "finished" drafts to help polish, but I've also taken them messy first drafts so we could hash out together how the story might move forward. Their feedback is invaluable to me, and save me a lot of floundering around as they are often better at pinpointing what kind of problem is holding back my story than I am because they are a step less invested and more objective, and they have a lot of experience trying to do this, too.

So, I've got a process and it works for me. Will it work for you? Hell if I know. But, if you don't have a process that works for you, you can do worse than trying on structures and tools that work for other people. Even now that I've written six novels and seen three of them through to publication, I'm leaving room for growth, for figuring something out that will streamline or improve my process and product. It's a lifelong learning process and that's part of what makes it awesome.

Posted by Samantha Bryant at 9:39 AM