I'm not Gloria Gaynor, but I will survive 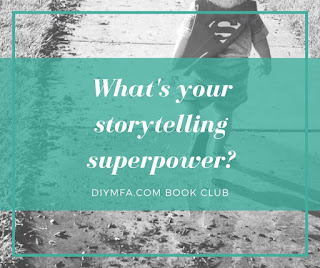 Today, in the DIYMFA book club, we're talking about our storytelling superpowers. There's a fun little quiz to get you started. I'm a sucker for these online quizzes that claim to analyze something about me based on what pictures I select and that sort of thing. They're fun for me, in the same that horoscopes are fun. I take them with a giant grain of salt, but love it when the results seem accurate, and sometimes even when they don't.

This one is designed to tell me what kind of characters I tend to write, and there's a bit of truth in the results. 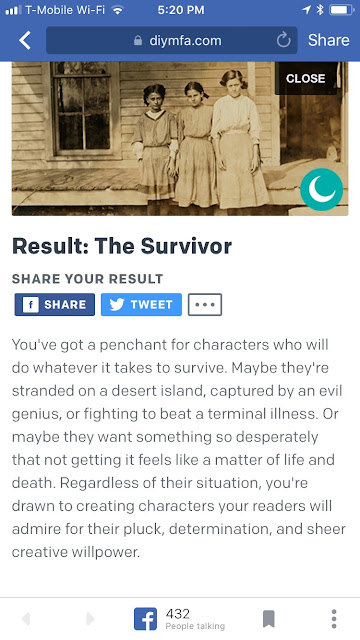 My critique group friends phrase it differently, saying that I've got "a thing for stubborn women," but really it's the same thing, isn't it? We call it determination if we like what you're being stubborn about, don't we?

My published works definitely feature a lot of survivors. The Menopausal Superhero series has been described as half women's fiction and half bam-pow action, and that seems accurate to me. The genesis of the series lies in considering what might happen if the people who gain super-heroic powers were not unattached teenagers, but women with careers, families, and established lives. All of those heroines are survivors of something (cancer, bad marriage, the corporate ladder, parenting, etc.), and show their persistence and strength in fighting through the new obstacles life has thrown at them in dealing with the disruption to their lives caused by these changes.

I see the same characteristic pluck in some of the characters in my not-yet-ready for publication works, too. Lena and Freda, the sisters in my unfinished historical fiction trilogy, starting with Cold Spring; Rat Jones, the angry young woman in my middle grades novel awaiting a final pass (Rat Jones and the Lacrosse Zombies); and Sherry, the protagonist of my first-ever novel, fighting a battle against her own mind (His Other Mother).

My current WIP, Thursday's Children, is dystopian-young adult-romance, and Kye'luh Wade is another survivor, determined to keep her cousins out of the hands of the Ethical Behavior Committee by force of sheer will.

It's interesting that such a diverse cast of imaginary friends as populate my works have a commonality. Perhaps my grandmother was right when she said that I "another stubborn woman in a long line of them."
Posted by Samantha Bryant at 6:22 PM