Coincidentally, I picked two movies that premiered in 1942 for my watching this week: Now, Voyager with Bette Davis and Woman of the Year with Katherine Hepburn. Both are striking for their exploration of roles of women, and both left me frustrated by not quite being willing to go all the way. 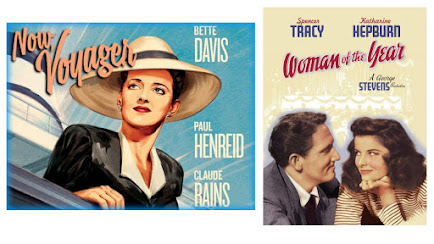 In Now, Voyager, Bette Davis plays Charlotte Vale, a woman from a wealthy and respectable Boston family ("Oh, one of the *Boston* Vales"). When we meet her, she is thoroughly cowed by her overbearing mother and deeply unhappy, though her very frustration with her role points to a stronger spirit beneath than sometimes makes itself known. Her story is one of coming into herself.
In contrast, Katherine Hepburn's Tess Harding in Woman of the Year is a woman very much in charge of her own life, sure of herself and cutting a wide swath in the world as an activist, columnist, and speaker on a variety of social and political issues. Her story is one of coming out of herself a bit.
Both roles were well suited to these iconic actresses. Who better than Bette Davis to drown us in big, emotional eyes and delivery fiery lines with passion? Who better than Katherine Hepburn to hold tears in a tightly controlled face, resisting the revelations of self laying themselves before her?
But neither story satisfied me.
I am wary of stories that romanticize infidelity, due to my personal feelings about marital infidelity, so Now, Voyager had a hard row to hoe winning me over, since a central tenant of the story is the love between a married man and a woman who is not his wife. We're meant to sympathize with the man who made a bad match and is now "trapped" in a loveless marriage (though we never see that wife or marriage for ourselves). To his credit, he was never dishonest about the fact that he was married and had no intentions of abandoning his family and starting anew with our heroine.
So, one could argue that our heroine knew what she was walking into. I found I had complex emotions, watching the way that they influenced each other while still maintaining separate lives: he returning to the work he loves with her encouragement, she finding confidence to stand up against her bullying mother with his support. Was he an obstacle to her finding happiness with someone else? Or was her own heart the true obstacle?
The story gives Charlotte the opportunity to marry someone else and she turns it down admitting to herself and her potential husband that she doesn't love him.

What the story doesn't quite make clear is the line between self-sacrifice and self-determination. I could read her eventual care for her would-be-lover's daughter in either light. I've ordered the novel, hoping that I'll get a bit more of the interior life of the main character and understand better why she made the decisions she did.
In the end, Charlotte made a life for herself that was truly independent, without a mother, husband, or even would-be-lover to tell her what to do, but she still seemed apologetic about it, and I guess I wanted her to embrace it fully.
That ending line is a honey though, full of ambiguity and poetry.
(And oh my, how sexy they make cigarettes. I wonder how much the tobacco industry paid for that placement).
In Woman of the Year, I found myself wondering why two intelligent people like Tess Harding and Sam Craig could ever have believed a marriage partnership between them would work. Maybe it's intended as a lesson about how a sexual charge isn't enough to base a marriage on? (They do really sell that sexual charge, though):
It's not as bad as Bringing Up Baby where I find myself screaming "Run!" at Cary Grant's Dr. Huxley, hoping he does not get eaten alive by Hepburn's manic pixie dream girl.
But all the same, Spencer Tracy's Sam Craig seems to be a man who knows what he wants and all signs point clearly to danger! I don't buy that he didn't see it.
Tess doesn't see him as an equal and shows him again and again that he is not first in her heart, or even second or third, but quite low down the list with things nice to have, but not truly necessary, like a pretty lamp or a pet poodle you pay someone else to walk for you because you don't have time.
But he marries her anyway. And Hepburn gets her trademark self-realization moment, which she sells beautifully, but at the end I still don't really believe they're going to work as a couple. Honestly, the only thing that holds the romance together is the on-screen chemistry of Hepburn and Tracy, because it's not there in the story.
While Tess is arguably a feminist character, having built an impressive brand as "Tess Harding," the story falls back on the old saw that ambitious women must feel the lack of love partnership in their lives. Certainly some women (me, for one) want both a husband and a career and manage to have both, but there's nothing in this movie to convince me that Tess ever felt the lack of a husband in her life or wanted to make significant changes to how she lives her life to make room for one. Other than possibly sexual spark, I never saw anything in the story to explain why she wanted him at all.
One of the keys to traditional romance stories is that the reader/viewer should be cheering for the couple to get together, and I wasn't actually doing that in either of these films. Yet, I liked both main characters and hoped for their happiness. I guess they work for me as sort-of anti-romances.
If you've seen these films, I'd love to hear what you think in the comments. Same if you have suggestions for other films of the 30-60s with strong female leads for me to check out!
Posted by Samantha Bryant at 7:59 PM