June Reads: Short, but not Sweet

Here I am halfway through the year, and I've already nearly met my yearly reading challenge. I always plan to read 52 books: one per week. Generally, I read a bit more. This year I'm already at 41 books.

I read nine books this month, though to be fair, they were mostly quite short. I found my attention scattered, what with end of school year burnout and a suddenly very crowded social calendar with family obligations and writer-life opportunities now that vaccination has re-opened some possibilities. I was out of pocket for 11 of June's 30 days which is quite a lot, especially after my homebody habits of pandemic life. 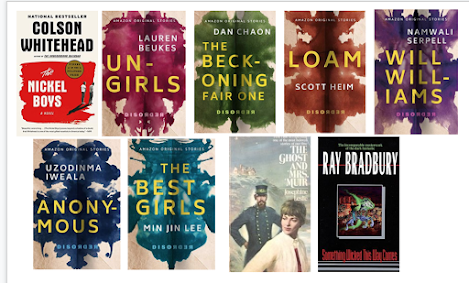 I started with Colson Whitehead's Nickel Boys, a choice by my neighborhood book club. I had previously read his Underground Railroad, and liked it overall, but was a bit put off by the intermixing of fact and fantasy. This story was much more succinct and tight and I think that's part of what kept me engaged a bit more. Now that I've had a little time to think it over, I think I prefer Nickel Boys which stuck closer to actual historical events and realistically likely events. But it was a heartbreaker.
So after having my heart broken, I picked up Un-Girls by Lauren Beukes. At some point Audible had offered me this book and others in the Disorder series for free or at low cost (I don't remember), and since I already admired Beukes's Broken Monsters, I accepted the offer. I found both these works horrifying and creative, taking angles I'd not seen before. Her body horror is shudder inducing.
Having peeked into the series, I became curious about the other five books in the Disorder series and quickly read the rest of them: the twisty and ever-changing The Beckoning Fair One by Dan Chaon, the fascinating but inconclusive Loam by Scott Heim, an Edgar Allen Poe retelling in Will Williams by Namwali Serpell, the all too realistic Anonymous by Uzodinma Iweala, and the deeply sad Best Girls by Min Jin Lee with its echoes of Thomas Hardy. I recommend the entire series. Each is 1-2 hours long and each takes on horror from an unusual angle. 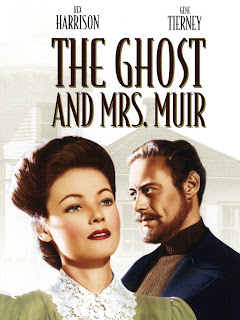 After that horror, I was ready for something lighter so I chose The Ghost and Mrs. Muir by RA Dick (the pseudonym of Irish author Josephine Leslie). I already knew and loved this story from the 1947 movie edition.

I was happy to find that much of what I loved about the movie was also present in the novel and was especially touched by the plight of "poor Lucy" who had to learn to stand against that most difficult of obstacles to an independent life: people who love you.

Quite a charming and romantic story which also has a lot to say about the importance of taking charge of one's own life.

I finished with Something Wicked This Way Comes by Ray Bradbury, a story I knew from the 1983 movie, but had never read. It, too, was a relatively short work I had purchased some time earlier and found waiting in my Audible library when I sought short books to read.

I have really enjoyed a lot of Bradbury's short stories over the years, though some of them can feel "quaint" these days in that they are less cynical and less concerned with startling and unpredictable plot twists. His mild paternalistic misogyny can be annoying, but like Asimov, he mostly avoids the problem by having very few female characters and never focusing on them if he does have female characters.

In trying to describe this one, I said:

"This book is a celebration of that cusp moment of childhood into adolescence (particularly for young boys--one of Bradbury's consistent failings is creation of meaningful female characters). It's a meditation on aging and regret. It's nostalgia brewed into a fine tea that, while faintly bitter, still pleases the senses."

I finished the month with Alexandre Dumas's The Three Musketeers, which I have not yet finished, so I'll have to tell you about it next month. So far, I'll say that it holds up quite well and that much of what you know and love about these characters from all the movie and television adaptations came directly from Dumas's pen.

How about you? What did you read this month? I'd love to hear about it in the comments!

Posted by Samantha Bryant at 5:46 PM