I haven't written about it much here, but I am a bit of an old movie buff, particularly films of the later 1930s to 1950s. Black and white. Classics. I inherited this interest from my mother and throughout my childhood, we watched lots of such films together, whenever they were on TV. 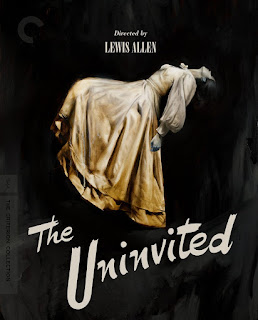 Off and on for the past couple of years (interestingly: about the same amount of time I've been trying to write my own Gothic romance novel), I'd been thinking about the film The Uninvited, from 1944, with Ray Milland, Ruth Hussey, and Gail Russell.

At first, I couldn't even figure out what movie I was remembering, or if I'd made some kind of amalgamation of several old films in my brain. I have watched and read more than a few things in this genre.

I remembered that it was Gothic and scary, set in a stunning clifftop home, and some particular images and plot points. It took a bit of doing before I came up with the right search terms and learned the name of it.

I requested it at my local Retro film series, but so far, they haven't shown it. And it's never on any of the streaming services, so I finally just bought a disk of it, the Criterion edition (a distinction other old movie fans will appreciate).

I got Sweetman to watch it with me last night.

I'm happy to report that it held up well. I fell in love with Windward House again, and so wish it were real and that I could go stay in it for a while, scary crashing waves at the foot of the rocks cliff and all. If you're a sucker for Gothic mansion settings like I am, this film is worth watching just for the house.

Beautiful, beautiful, beautiful use of shadows and reflections amped up the atmosphere, and the trick photography used to more fully materialize a ghost still looks classy and "real" if that's an adjective one can apply to a spirit created by camera trickery.

As one expects in Gothic tales of this sort, there's a terrible secret in the past and it threatens our young ingenue in the present. It's quite convoluted, and I found myself pausing to untangle the threads for my husband more than once (he's less steeped in this kind of fiction than I am). I won't spoil the story here, in case you want to seek this out, but it had all the right elements of betrayal and questionable motivations for this kind of story.

If you speak Spanish, the fuller story breaks more quickly when our ingenue is briefly possessed by a Spanish-speaking ghost who tells us very directly what happened, but I'm quite sure the film-makers did not anticipate the audience understanding what the ghost actually said in that scene because it all comes out again more slowly.

A secondary plot took me by surprise. It had probably gone over my head when I watched the film as a child, but really added a level of threat and upped the ante with a side character (Miss Holloway) determined to keep certain secrets buried, regardless of the cost to others because of her obsessive love for one of the deceased characters.

Shades of Mrs. Danvers and Rebecca, with room in the story that the feelings were mutual this time. Cornelia Otis Skinner's Miss Holloway was a different kind of threatening than Judith Anderson's Mrs. Danvers, but they might be sisters under the skin.

Implications of lesbian love were strong in that thread, and not portrayed as healthy and romantic. Holy subtext, Batman! More dangerous obsession, and dark secret sorts of themes.

I'd love to write something playing in the backstory of this world, with the thwarted love, later love triangle and jealousies, and who exactly that missing father was, or what the grandfather did and didn't really know. The story did a lot with what it didn't tell us, even though it told us a lot.

I'm also curious as heck about our outside interlopers, the brother and sister (Roderick and Pamela Fitzgerald) who pooled their funds to buy the mansion together, only to become embroiled in a local tragedy and haunting. Neither of them married, neither of them seeming to have any particular ties in this world, and unusually close for adult siblings. What past tragedy had they survived together?

Lastly, I was impressed by the mix of humor and horror. It's always a tricky balance to strike, and bringing in the wrong note at the wrong time can ruin a story, but The Uninvited beautifully blended lighthearted touches with a dark and troubling storyline.  Ray Milland was at his most Cary Grant-like, conveying a lot with a sideways glance or body language, revealing an inner little boy who wanted to run away from the scary things but was held in place by his sense of proper duty as a grown man.

The final minutes of the film wrapped everything up in a neat bow, delivering two impending marriages, happy pets (a dog and a cat), and every sign that the future will now be rosy for all involved now that the ghosts have been laid to rest. Practically Shakespearean in the rush to matrimony for all involved. It was charming how quickly everyone's future was settled now that we got that pesky troubled past dealt with. If only it were nearly that simple in real life.

So, if you haven't watched it yet, go check out The Uninvited. It's well worth the watching.

Posted by Samantha Bryant at 3:41 PM