For me, there is a fierceness to motherhood, a mama-bear willingness to fight. As soon as I gave myself over to being someone's mom, this determination and protectiveness bubbled up in me out of nowhere. I had no idea it was there.

I've been lucky. I haven't had any cinematically intense battles to fight for my children. They've been the more ordinary battles with educational systems, friendship, love lives, disappointments, etc. We're fortunate.

But still, that fierceness is there, just under my breast bone, burning like a hot coal.

That's probably why so many of my favorite fictional mothers literally fight for their children: 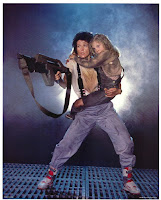 Ripley didn't get to raise her own daughter.

When she left on her mission for Alien (the first film), she promised her girl she'd be back for her birthday, but after an accidental 57 year cryo-sleep, she found she'd missed not only that birthday, but all the rest of them.

Her daughter was dead.

But mothers are made under a variety of circumstances and many mother someone they didn't birth.

The lengths she goes to in order to rescue Newt show the depth and intensity of that love. In the end it's mother vs. mother with Ripley fighting the Queen Alien.

It's not easy when life takes a left turn, depriving you of work you were passionate about and forcing

you to find your happiness in a smaller life. But Helen Parr knew that her family's safety and well being mattered as much as her personal satisfaction. She threw herself into making the new life work.

And, then, when the call to action came, when her children were in danger, she didn't hesitate to bring every skill she had into play.

And when it came to it, she knew when it time to let her children grow up a little and come into their own:

"Remember the bad guys on those shows you used to watch on Saturday mornings? Well, these guys are not like those guys. They won't exercise restraint because your children. They will kill you if they get the chance. Do not give them that chance."


You might think Elastigirl would be all about flexibility, but in the end, she's about balance: family, career, personal satisfaction, happiness in her marriage. She working to have it all, and if anyone can do it, she can. 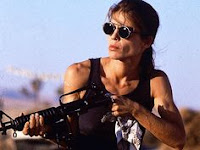 What do you do when you learn that your child is the one hope for the planet, the future leader of the Resistance?

You become the kind of mother he's going to need.

Yeah, Sarah might have started out as a damsel in distress, but she didn't sit around waiting to be rescued for long.

No. She went out and got an education, and we're not talking about a liberal arts degree from a community college.

She learned self defense, security, weapons, and guerilla warfare. She kept her son and herself off the grid and out of the hands of their enemies. And when that didn't seem like enough, she went on the offensive (which unfortunately, landed her in an asylum).

Everything was always about her son, but the real hero of this series is his mother.

In an alternate history steampunk story, Briar Wilkes is a pariah. She fell in love with the wrong man and there are those who blame her alongside him for the release of blight gasses that left the Pacific Northwest a post-apocalyptic wasteland.

But she tried to protect her son from all that. She never talked about the past, never let him know what kind of a man his father was, wanting to save him the pain and suffering. Tried to let him have as normal a life as was possible.

It backfired, as secrets are wont to do, and young Ezekial set out in search of his father, into a dangerous world full of people who would use him or kill him.

Briar didn't sit on her hands, fretting at home or seeking a hero to save them. She became the hero she needed: she put on her goggles and breathing mask and set out into the poisoned world to save her son, facing her inner demons and some outer ones along the way.

5. Molly Weasley, of the Harry Potter series of movies and books.

Not every mother wears her fierceness on her sleeve. Some might seem to be a homemade cookies and sympathetic ear sort of woman, taking a supporting role in her children's lives. But, threaten her babies? You'll see a whole new side of Molly Weasley, one that looks a lot like Ellen Ripley:

6. Alana of the Saga series of graphic novels by Fiona Staples and Brian Vaughan.

Alana is complicated. She makes rash, impulsive decisions. She acts before she thinks.

She joined the military to escape her abusive situation, but wasn't willing to take orders thoughtlessly.

Then, she fell in love with an enemy soldier, someone outside her species, and ran away with him even thought it was likely to get them both killed.

Not the best circumstances for motherhood.

I love Alana because of her complexity. She has conflicting motives and emotions and makes bad choices, but her love for her child is a constant, something she'll undergo tremendous trials to protect and rescue.

So, there's my Mother's Day list of fierce mother characters I love. Who's on your list? Or are you a fan of another type of fictional mother? I'd love to hear your thoughts in the comments.