Fellow author Andy Brokaw offers a writing prompt each week for her "Wording Wednesday," so called because the prompts are released each Wednesday.  You can check it out and participate here if it catches your fancy, too. You can see what I wrote for the first three prompts here,  here, and here. 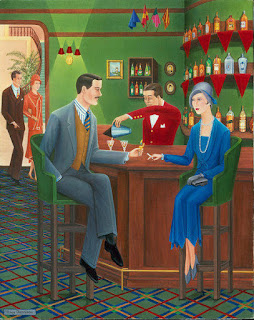 The bartender raised his elbow as he poured to hide the smirk on his face as another would-be Don Juan sidled up to the bar to hit on Eloise. Not that he didn't understand why they tried. She was stunning, especially when she wore blue, and she was clad in a jewel tone number tonight that made her skin glow like polished sea glass in sunlight.

She'd been waiting for an hour and the man in the soft suede vest was the third Lothario to try and charm her tonight. He obviously wasn't used to being ignored. He'd gone from suave to petulant in the space of one lit cigarette, which she accepted without a word or a smile.

The bartender didn't seem too worried. Eloise was hard to phase, and none of these men were drunk enough to start a public scene in one of the nicest hotels in the city, no matter how much their egos hurt. It was unlikely he'd have to intervene.

Another hour went by before Agnes arrived. She was a vision, too, in her own way, swathed in a sherbet-colored ensemble that clung in all the right places. Unfortunately, her husband Reginald clung to her as well, fingers firmly clasped around her elbow. She hadn't been able to ditch him.

Eloise turned to the bar then, and picked up the first of the three martinis sitting there, one purchased by each would-be lover who had failed to win her over. She knocked it back, then pulled the olive off the stick with her teeth. It should have been sexy, but the ferocity was nearer to threatening.

She cozied up to the second glass and ran her ungloved finger around the rim, staring daggers at Reginald and Agnes who had settled at the opposite end of the bar. The bartender began to look nervous, brandishing the shaker like he might need to use it as a weapon. Eloise ate the olives and then swallowed the drink, leaving the stick in her teeth.

She had reached for the third martini--the one that would lead to dangerous choices--when I intervened. I walked up and leaned against the bar, dropping my purse between her and the third martini. "God, what a night, huh?" I gestured at the room as if the plaid carpeting and green walls were somehow responsible for all that ailed the world.

She looked at me, startled, then leaned to reach around my purse for the glass. I grabbed her wrist, stroking the velvety skin over her pulse point with my thumb. It was a bold move, but she liked boldness. "You're too good for her anyway."

She pulled her hand away and cradled it against her chest in the other hand, which still wore a gray leather glove. A small smile lifted the corners of her gorgeous mouth still perfect in plum lipstick I longed to taste.

I took the third martini, swirling it briefly in the glass before taking a sip. Her eyes widened. I had her attention now. I pulled out the swizzle stick with my tongue, maneuvering the olive into my mouth. It had taken me hours to master that trick, but it was worth it to watch the color rise in her cheeks. I set the unfinished drink on the bar and pulled my purse toward me. "It's a lovely night for a walk," I said.

I took a few steps before I looked back over my shoulder. She was standing beside her chair, purse in hand, one glove dropped from her lap onto the floor. I went back and picked it up, offering it to her. "You dropped something."

She pulled the cloth from between my fingers slowly. "Indeed," she said, her voice as dark as her skin was bright. "And you picked it up."
Posted by Samantha Bryant at 9:07 PM