Last week, I decided to start participating in a weekly writing prompt group. I enjoy playing with writing prompts to reconnect with the lighter side of a writing life (where I write things just because it's fun).

Fellow author Andy Brokaw offers a writing prompt each week for her "Wording Wednesday," so called because the prompts are released each Wednesday.  You can check it out and participate here if it catches your fancy, too. 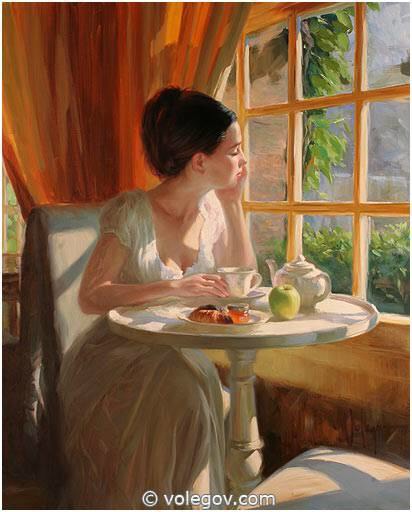 Genevieve had long fantasized about a moment like this one, surrounded by luxury with time on her hands. She'd had often imagined what it would be like, and, for once, the difference between her imagined version and real life did not disappoint. She didn't care what society had to say about how she'd arrived in this seat. It was hers now.

She leaned into her hand and let her gaze wander the landscape outside her sunlit window, the orchestrated greenery and placid lake glistening with the first brightening of the sky. She had always loved the gardens and walkways of the house, but looking out at all the finery and realizing it was her own made it shine all the brighter in her eyes.

Steam drifted from her cup, warming her forearm. The hand resting against her cheek was already softening. The callouses that had thickened on her palms from years of laundress work were still rough, but there was a spongy feeling to them,  less like pumice stones and more like flesh was meant to feel. They'd never be smooth and unlined like a real lady's, but they were softer than she could ever remember them being after a few weeks away from lye, bleach, and hot water.

She'd begun her life "in service" when she'd been barely ten. Her mother had gone straight from the orphanage into the kitchen herself, and since she had refused to reveal who had gotten the child on her no one knew who to call to take care of little Genevieve when her mother was killed by a kitchen fire.

The Old Master felt sorry for her, so had kept her alongside Alexander and Abigail,  his own children, taught by the same governesses until she was deemed old enough to work.

"Old enough" came abruptly one Sunday afternoon, after the lady of the house caught Alexander and Genevieve playing "wedding" in the garden. Genevieve didn't understand what the problem was then, but smiled to herself now, realizing that Alexander's mother's fears about what kind of "association" her son might make had proven all too real.

So, Genevieve who had been yanked from the servants quarters to the nursery, was flung back down the back stairs into the resentful arms of the other servants and into a long, pocketed apron over an itchy black dress.

Nothing like the silken blouse she now wore, purchased in Paris along with all her other clothes, as part of her honeymoon.

A slight squeak alerted Genevieve to the opening of the door into the morning room. Alexander came in, fumbling with the cuffs of his shirt. Genevieve rang the silver bell on her tray and hurried to her husband's side, deftly fitting his shirt cuffs into his jacket. He was hopeless with buttons and ties. Smoothing his lapels with her softened hands, she smiled up at him and leaned up on her toes to give him a kiss just where his ear met his cheek.

Alexander colored, pleased and embarrassed. He took her hand and walked with her to the window, both of them standing and watching the sun finish its climb into the heavens and politely ignoring the  busy sounds of the breakfast being laid behind them. Genevieve leaned her cheek against her husband and he curled his arm across her shoulders. "Happy, darling?" he asked.

Posted by Samantha Bryant at 9:40 PM