Fellow author Andy Brokaw offers a writing prompt each week for her "Wording Wednesday," so called because the prompts are released each Wednesday.  You can check it out and participate here if it catches your fancy, too. You can see what I wrote for the first four prompts here,  here,  here, and here.


Today's picture-prompt is "December" by Zoe Persico and can be found on her website at http://www.zoepersico.com/Illustrations You can see the story it inspired for me below the art. 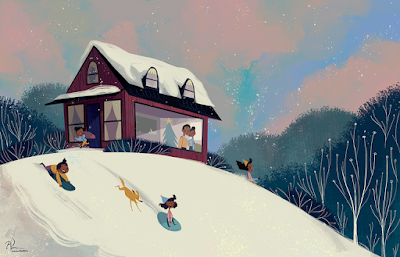 Jacqui had never lived in a place with snow before. Sure, Florida had the beach, but snow? That was something magical, something she'd only ever seen on television.

For hours last night she hadn't been able to sleep, getting up every few minutes to press her nose against the glass and peer into the darkness, hoping to see the first flakes falling from the sky.  She'd finally fallen asleep and had wakened to frosted windows and a hillside gleaming white under the late morning sun. It looked like the entire area had been doused with marshmallow fluff.

Her older brother and sister tried to pretend it was no big deal, but she noticed that they came downstairs much faster than usual, already wearing long pants and sweaters. Their parents had let them sleep in after school had been called off. When their mother had opened the garage to reveal the surprise gift she had purchased for them--three  brand new sleds--Jacqui had almost knocked her over with the exuberance of her hug.

The first trip down the hill had been dizzying. Her round plastic sled had spun in circles until she tumbled out near the bottom of the hill and rolled on the ground. She was laughing when her brother caught up to her, though and the two of them raced back up the hill to try again. No matter of ice down her boots or back could dampen her enthusiasm for skimming across the surface of the thick frozen landscape.

Her mother finally made her come in and warm up for a bit, but Jacqui knelt facing the biggest window, cocoa steaming the glass so she had to wipe it clean with her elbow. Her mom sat next to her and gave her a hug. "Beautiful, huh?"

"Wonderful." Jacqui dipped her tongue into the whipped cream her mother had topped the cocoa with, then took a noisy slurp. "How long will it last?"

"Oh honey, this is Colorado. We'll have this all winter long."

Joy coursed through Jacqui like an electrical currant. "Really?"

Mom had promised that their new life would be a fresh start. Now Jacqui was starting to think it might be magical, too.
Posted by Samantha Bryant at 7:23 PM