I'm still having focus issues, so not reading as much as I would like. I've been slogging my way through Absalom, Absalom! by William Faulkner (A Rose for Emily is one of the best short stories I've ever read), but I don't think I will have finished it in time for my reading group. I'll still go, because I've read other Faulkner and will want to hear what others say. Faulkner's sentences are so lush (and long!), that I find myself getting lost between the beginning and end and rereading one sentence several times like I might a poem. It's beautiful, but slow reading. It also reminds me of Gertrude Stein, where the same idea is woven in and out again in repetition and reiteration.

For example, here's one sentence: "I don't plead material necessity: the fact that, an orphan a woman and a pauper, I turned naturally not for protection but for actual food to my only kin: my dead sister's family: though I defy anyone to blame me, an orphan of twenty, a young woman without resources, who should desire not only to justify her situation but to vindicate the honor of a family the good name of whose women has never been impugned, by accepting the honorable proffer of marriage from the man whose food she was forced to subsist on."

It's the right tone for the woman telling the story. She digresses mid-digression and does not pause for breath, but it's an exhausting read.

As a break from Faulkner, I began a new book that I recently picked up: Mothers (Book One in the Invisibles Series) by Michelle Read. I'm only three chapters in, but it promises to be a lot of fun.  I picked it up because i met +Michelle Read on a community on Google+ and learned we were both writing female superheroes.  Michelle's book is engaging so far. I like the main character and sympathize with a lot of her mommy problems and am already curious about the explanation for some of the strange things she's been seeing.

Other than that, I've been guilty of binge television watching instead of reading. On the up-side, this is because I've been writing a lot myself (2,000 words a day or more), which means that my brain is tired and ready for some more passive entertainment, like the Tube.  My popcorn show right now is Lost Girl, a series about a succubus private eye. I don't do cable anymore, so all my TV watching is on Netflix or Amazon Prime. I'm in the second season of Lost Girl, and so far have only hit two episodes I thought were awful.

NJ continues to read up a storm. She's still on her graphic novels kick. She adored Lilith Dark by +Charles C. Dowd . The morning after she read it, she described it to me in breathless detail and said, that she was actually Lilith Dark. (She's not as rude to her family as Lilith, but she does bear more than a passing resemblance to the fictional child).

Tiny Titans continue to be popular. We checked out all the library had that we hadn't already read. She Adventures of Super Diaper Baby by George Beard and Harold Hutchins. I may have to buy her copies of those to keep because she wants to take them around to show her friends (especially her male friends).

She's also been reading recipes from an old Strawberry Shortcake book that used to my sister's when she was small.  We've made Whizzer Fizzers (floats) and Monster Sandwiches (cleverly cut pieces of normal sandwich stuff).  NJ has a baking thumb the same way some people have a green thumb for gardening.

The elder daughter gets home next weekend (hurray!) and I'll find out what she's been reading. For NJ at least, this continues to be the summer of books.

I wanted to take a moment to highlight the new release of a writing friend. Chad A. Clark will put out a collection of short stories on July 18. It's called Borrowed Time and I'm pleased to reveal the cover today (see below). I've got my pre-release copy and look forward to reading it soon. 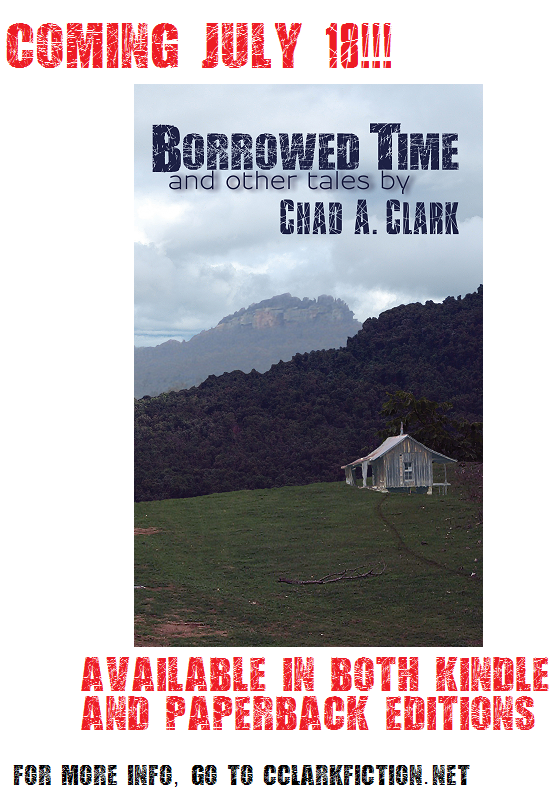 Borrowed Time is a collection of six tales bridging the chilling world of horror and the mind-bending realms of science-fiction. Join a young man searching for answers in the wake of a friend’s suicide, who uncovers an evil that proves some questions are best left unasked. Journey with a young artist along haunted back-country highways, hoping to make it home while re-discovering herself in the process. Travel to the distant future where one man breaks free from the safe isolation of his existence and risks everything so that he might learn what lies beyond the confines of his reality. Read these and more in the debut book from this new author.

Storytelling has always been one of Chad A. Clark’s passions. A Midwestern raised author, he specializes in horror and science fiction. Learn more about him at his website, cclarkfiction.net. You can also enjoy a new original work of fiction every week on his website, bakedscribe.net.
Posted by Samantha Bryant at 7:00 AM