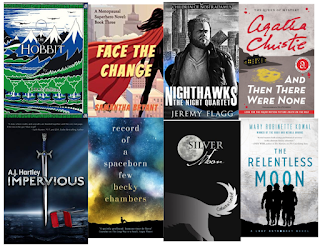 I'm honestly surprised to find that there are eight books in the list of what I read in July. The month felt relentless, especially when you consider that it's my month "off" from teaching life. But, teaching life has garnered way more of my attention than I usually give it in July, as there is so much to figure out about how school will operate come fall.
I didn't feel as if I had any time to read, but looks like I still managed to read a few things, after all.
The Hobbit, I actually mostly read in June. It's just that I finished it in July. It was a selection for the First Monday Classics Book Club, a group I help facilitate alongside author and friend James Maxey for Orange County Public Library.
I had a little PTSD from the last time I read Tolkien, which coincided with the release of the beloved films, so I wasn't looking forward to reading The Hobbit. My memory of reading Tolkien was that I loved the world, but that the storytelling wasn't character-driven and therefore didn't really engage me. So it was lovely to be surprised by The Hobbit, which turned out to have a very personable narrative style and strong characters that popped on the page for me. Of course, I had last read The Hobbit when I was about ten years old, so I might be forgiven for not remembering that.

The other First Monday selection I read this month was Agatha Christie's And Then There Were None. I had read this one before as well, probably when I was around thirteen or fourteen years old, in an edition that was titled Ten Little Indians. Racist considerations changed the title of this one twice--the original title used a racist slur for black people. And Then There Were None is, in my opinion, a better title anyway. Luckily, I didn't remember the plot all that well, so only figured out whodunit a few pages before the book would have told me anyway. Reading Christie isn't as much fun if you already know the answer to the mystery.
You might notice that one of the books I read in July was my own book. Starting in June, I re-read all the Menopausal Superhero series in preparation for writing novel number 4 (working title: Be the Change). I'm still proud of Face the Change, and re-reading the series helped jumpstart my process for that fourth book, which I've now got got around 12,000 words written for.

I read Nighthawks by Jeremy Flagg because I recently found a new group of writing colleagues in the group at Superhero-Fiction.com I'm planning to work my way across the group reading their books. I like to support other writers, but for me that process has to include reading their work myself. No matter how much I like another author personally, I only cross promote with people whose work I have direct experience with and deem worthy. Jeremy's book really grabbed me with an interesting world and diverse cast of characters. I can easily see myself heading back for more!
Similarly, I read AJ Hartley's new book, Impervious, in part because we share a publisher. We're also both educators. I already knew a bit of the backstory on why AJ wrote this book going in, and I won't tell you about it here because it's a story better read blindly--letting the book reveal what it is as you go through rather than spoiling it with too much description. I will say that it handled difficult topics with grace and I highly recommend it.
Silver Moon also came to my attention because of a professional connection. Catherine Lundoff offered a class on Book Marketing that I sat in on, and of course I became curious about her menopausal werewolves, since I also write about power and change in midlife for women. I enjoy werewolf and shifter stories, and this one took a unique spin on some of the tropes.
I guess that only leaves two books that I read without ulterior motives, but just because I wanted to read them. Interestingly, both are also the third books in a series that I enjoyed the other two volumes of. 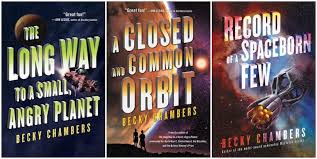 Becky Chambers's Wayfarer series is such a positive, optimistic vision of humanity that it should be offered as a vaccine for all the ugly underbelly 2020 has revealed. Record of a Spaceborn Few was just the jolt of optimism I needed. 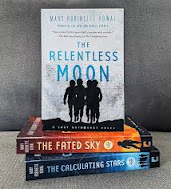 On the surface, the Lady Astronaut series isn't as optimistic, but it's also a series that gives me hope when things seem dark. The series created an alternate history in which Earth was impacted by a catastrophic meteor strike that necessitated a whole new kind of space race and the formation of off world colonies. We follow the stories of women in the new society this creates and I love how Kowal is able to imagine how a group of impressive women would have broken boundaries if something like this had really happened and present these stories in a way that feel accurate to that bygone era and the roles women would have been juggling at the time.
So, what did July bring me? Hobbits, Murderers, Superheroes, Werewolves, and Pioneers. What a month! No wonder I'm tired :-) I'd love to hear about what you've been reading. Despite the fact that my TBR will outlast my life already, I'm always up to learn about new books to love!
Posted by Samantha Bryant at 6:00 AM