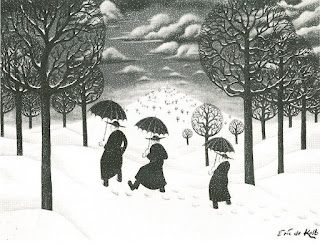 The new season of Wording Wednesday is underway. Fellow author Andy Brokaw collects a set of prompts and puts them out there for the world to use for inspiration. This season, the theme is weather and we continue with "Snow Scene" by Eric de Kolb. You can buy copies of it at https://fineartamerica.com/featured/a-winter-scene-eric-de-kolb.html Check out the links and play along if you'd like, or just enjoy reading.

The three gentlemen from the Hebron Anachronist Society set out in into the snow.

"Tomás" led the way, in keeping with his role as Grand Inquisitor, followed by "Diego". "Adrian" lagged behind. He hadn't enjoyed playing Spanish Inquisition as much as the other men, and wished he could find a graceful way to bow out of this side trip into the Paper Cutter's Forest.

It was a popular tourist destination, and it was "so nearby" the Inquisition theme park. The forest did have a kind of grandeur, but he really just wanted to go home, to go back to being plain old Jeff, a mid-level accountant whom no one feared and who wore khakis and simple blue shirts to work instead of dark woolen cassocks that grew horribly heavy when the hems were dragged through snow.

He had tired of the game, and of the company of the other men, who proved far more gung-ho than he was about the whole thing. Maybe he wasn't meant for live action role playing. Perhaps he was better suited to reading about history than for trying to recreate it. It had certainly felt very real in the simulation and he hadn't liked it. Knowing about a Judas Cradle was one thing. Seeing one used…Jeff shuddered. Not an experience he'd forget soon, and he rather wished he could.

Standing still, he looked out at the landscape of beautifully sculpted, flat renditions of trees that stretched skyward. They were so very black against the stark whiteness of the snow, just as he was in the cassock and galero he'd had made for the event.

Beneath, he wore a soft light blue tee shirt that his ex-girlfriend had purchased for him. Even though she had long since moved on, he still wore the shirt whenever he needed comforting. He forgot what the material was called, but it was far nicer than anything he had ever purchased for himself and rubbing his hands across the material always soothed him. He undid a few buttons and slid his hand between to pinch the material between his fingers.

The lacy trees were placed very evenly and the view of them was an exercise in perspective. Jeff knew the exhibit couldn't be as large as it appeared and wondered about the technologies used to make it appear so endless. It really did seem to go one for miles, the trees growing smaller and smaller the further he looked.

While he'd stood contemplating the landscape, "Tomás" and "Diego" had moved on. A long string of footprints made a path leading deeper into the Paper Cutter's Forest. His companions were far enough ahead that he could no longer see them. Jeff pulled a foot out and shook it, noting the way the wet globs of snow clung to the black wool of his pants.

With one last glance at the forest, Jeff turned and followed his own tracks back to where they had started. He'd message, making some excuse about why he hadn't followed. Maybe next year, he should try another time period. He'd heard good things about the French Revolution group in Alexandria. It was only an hour or so's drive. No one knew him there. He could start again.

Posted by Samantha Bryant at 9:11 PM