I'm a Neil Gaiman fan and have been for many years. The first of his novels I read was Neverwhere, and I was hooked after that. My favorite is American Gods, though I also have a soft spot for The Graveyard Book and, of course, The Sandman series of graphic novels. I try to read everything the man writes, but he is disturbingly prolific and I sometimes read other authors, so there are still a few in the TBR.

So, of course I was excited to hear that Amazon was making a miniseries of Good Omens. 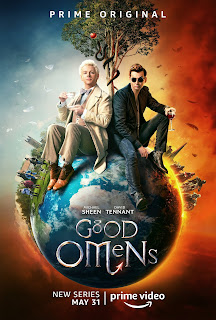 Though I remember the book fondly, I only remember the broadest outlines of the plot and a few particular moments. In fact, watching the series is sending me back to re-read the book with my twelve-year-old daughter.

I hear that the adaptation is not 100% faithful to the book, but trust that since Neil Gaiman was on board with the project that the changes were appropriate. In any case, I found that it held together well and was a very satisfying show.

Visually, the series was a delight. The contrast between Aziraphale (angel: played by Michael Sheen) and Crowley (demon: played by David Tennant) is beautiful, from their looks and outlooks to their demeanors and misdemeanors. They make a lovely yin-yang/opposites-attract friendship that holds the entire story together.

Aziraphale is quiet and fond of Epicuriean pleasures and old books. Crowley is a rockstar delighting in showy moments and grand gestures. Besides their affection for each other, they share an affection for this world and do not wish to see it destroyed, so when they become entangled in the plot to bring about end times, they determine to undermine it.

The rest of the story has its moments, but for me, this series was really about watching Sheen and Tennant create an odd couple for the millennium. Well worth the investment of six hours of your viewing time.
Posted by Samantha Bryant at 6:00 AM