I'm pleased to have guest author Kate McIntyre on my blog today talking about that no woman's land between books: sequel written, but not yet available. I'm in the same boat, and she's so right about how it feels! -SB

Darrington City is on the verge of total political and economic collapse. Olivia Faraday. the eccentric Deathsniffer, is the only employer willing to consider the resume of impoverished rich boy Christopher Buckley. Soon enough, Olivia and Chris have a grisly murder to solve -- if they can manage before the city is torn apart around them. The Deathsniffer's Assistant combines fantasy and mystery and is available via BookBub for .99c on November 30 and December 1st!

“When is the second one coming out??”

Ah. Is there any more double-edged question for a writer?

On the one hand:

“Oh my gosh! You liked my book? Well, you must, if you’re asking me for the second one. You must really like my book. You must be dying to find out what’s happening! That’s amazing. Someone actually cares what’s going to happen next in a story I made up! And they’re going to keep coming back and reading my stories! Can anything possibly be more wonderful?”

On the other hand:

“I don’t know the answer and I really want to tell you everything that happens because it’s burning a hole in my braaaaain!”

The sequel to my debut is called The Timeseer’s Gambit. And it is finished. It’s been finished for months now. The minute I typed “END MANUSCRIPT,” I jumped on twitter to let my people know. The minute I finished my final draft of that manuscript, I did the same thing. And unfortunately, some time has passed.
The thing about second novels is that while they take a lot less time to go from manuscript to book, it somehow feels a thousand times longer. My first book occupied a little corner of my brain while my agent tried to sell it. I was excited to find a publisher and get my career going, but it didn’t burn in me the way that the sequel does. The difference, of course, is... well, you. My readers. Nobody was waiting for the first one, and I had no guarantee that anyone was even going to like it.

A second book is an entirely different beast.

It drives me crazy when a review will say something like “I hope there’s a follow up for this,” or “I hope Chris experiences long term consequences for that.” I want to excitedly tell them that their wishes will all be granted in the sequel, or explain why they won’t, and I can’t. I have to put a sock in it and suffer. But that’s nothing compared to my fans.

I don’t have a horde of them, or anything, but I do have a few really devoted ones! And I get asked about the second book a lot, and honestly, it absolutely kills me keeping my mouth shut. I don’t think my fans believe me when I say I’m possibly more excited than they are, but it’s true. Everyone who’s read the second one so far claims it’s better than the first. I know for a fact I poured a lot more emotion and personal experience into the second one, too. I can’t even describe how much I’m looking forward to people who care about my characters getting their hands on the sequel.

As much as I want to, I can’t just start bellowing spoilers. I’m proud of the book and I want it to stand on its own legs. There’s so much great stuff in it that I want readers to experience in its full glory, and not in my breathless rendition of it. My secret is in my workshop group who have read the early version of it, including family and close friends and fiance. Every time I’m about to burst, I text one of them.

“I can’t wait for people to read the part where ______!” I write, and they inevitably, wonderfully, text back telling me how great that part is and how they’re excited, too. And then... whew. Some of the tension eases.

I don’t think there’s any way to really fix the hole this book is burning in me except a release date and books in hands. But for now, I’m just going to keep my lips as sealed as I can. And keep worshipping at the feet of the people who tempt me to speak up. As far as problems to have, eager fans is one of the best available. They’re the reason I do this. 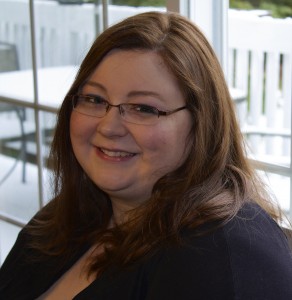 Kate McIntyre was born and raised in the frigid white north, having spent her entire life in Moncton, New Brunswick. She learned to appreciate the quintessential Canadian things: endless winters, self-deprecating jokes, the untamed wilderness, and excessive politeness. Somehow it was the latter that she chose to write about. Kate loves crochet, video games, board games, reading, and listening to bad pop music very loudly.
Posted by Samantha Bryant at 6:00 AM