I began writing stories about the moon back in 2013 when the Liftport Group decided to put out a monthly magazine about their endeavors to build a space elevator, first on the Moon, and later on Earth. Although I could not contribute to my friends’ efforts either scientifically or financially, I could write stories about a thriving society on the Moon in the near future.

The magazine lasted less than a year, but my stories about Luna were well-received. They sat on a shelf for a while, and now a new story comes out from Dingbat Publishing with every full moon.

The research I do for these stories is never-ending. I often become immersed in a thread of some fascinating detail I find, such as my hometown hero Vance Brand being in the back-up crew for Apollo 15. While researching an article about stuff the astronauts threw around on the Moon I discovered this list of man-made objects that are on the moon. Most of it is what one would expect; crashed satellites, jettisoned equipment, and mementos. Then there are the one hundred two-dollar-bills that Apollo 15 left behind. I have no idea why.

Anyone who has seen the Tom Hanks movie about Apollo 13 knows about Gene Kranz and his vests. The astronauts from several missions also played pranks on each other, such as inserting pictures of scantily-clad women in with the official documents for their peers to find. I was also interested to learn that, at the time the memorials to fallen astronauts and cosmonauts were placed, there were several cosmonauts whose deaths were still being kept secret by the Soviet Union.

We haven’t been back since.

All of these pieces of information, both trivial and historical, feed my imagination when I’m writing my stories. Although I leave the exact details of humanity’s return to the Moon purposely vague, I always strive to ensure that any real history is honored. I keep a bottle of little blue pills on my desk just to make sure the SciFi stays hard enough.

In The Cities of Luna, the Apollo sites are all world heritage sites. Locals and tourists alike visit the museums and tour the locations, which are carefully preserved. When I discover details such as the presence of water or other resources in a particular place, or the seismic activity on the Moon, it goes into a story.

A writer by birth, a redhead by choice, and an outcast of Colorado by temporary necessity, AmyBeth 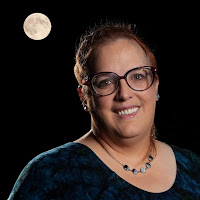 Inverness is a creator of Speculative Fiction and Romance. She can usually be found tapping away at her laptop, writing the next novel or procrastinating by posting a SciFi Question of the Day on Facebook and Google Plus. When she’s not writing, she’s kept very busy making aluminum foil hats and raising two energetic kids and many pets with her husband in their New England home.

You can find her on Facebook, Google Plus, and Twitter @USNessie or check out her Amazon Author Page.

AmyBeth's been very busy lately! Her Urban Fantasy novella The House on Paladin Court is available in electronic format at most of the usual e-book outlets. She has a weird little SciFi short story called The Immersion of the Incorporeum in the Biblical Legends Anthology Deluge. A new short story from The Cities of Luna is released with every full moon. The Day Lorinda Flew, about a little girl with special needs who believes that chickens, in the low gravity of the moon, can fly if they only have the right encouragement, came out in November. The next story is Sleighride, about a dad visiting the moon's North Pole. Since December's full moon is on Christmas, Sleighride will be out a little early. It will be released on December 19, which is the day humanity left the moon. 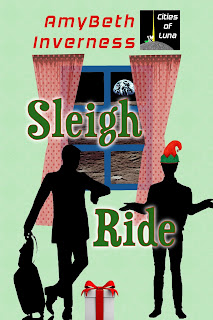