Let's talk about the word "benefit." 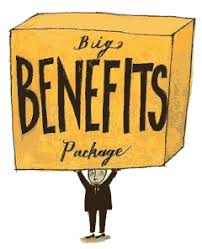 A good job comes with benefits. You might also be friends with "benefits." If there's need to raise funds, we might hold a benefit.

I might give you the benefit of the doubt or do something for your benefit. Then again, I might be concerned that you are benefiting unfairly. Maybe you are doing something only for your own benefit.

It's a complicated little word, full of negative and positive associations. It's all about advantage, and whether it's considered appropriate for you to seek or hold an advantage in the circumstances at hand.

There's a lot of politics of power in these few letters. Who has the ability to bestow or take away a benefit? How are they judging whether a recipient deserves the benefit they are receiving?

It's an old word, full of the baggage of a system of patronage. For an artist, independence is important to freedom of expression, but refusal of benefits comes with its own cost in quality of life.

A quick googling of word origins shows me a Latin root (bene facere) meaning do good to. Looking at the word with my contemporary eyes, I see "bene" which means "good" and "fit" which implies a suitability, a fitness. So to get a benefit, someone needs to judge my fitness.

The noun form also has connections with charity and gift giving.  Recipients of charity and gifts know the unspoken but important component of showing gratitude, especially if you want to receive further benefits. That takes us back to patronage, and the level of sycophancy required.

That gets tricky when benefits are part of payment made for services rendered.  The terminology, at least, still seems to make things like insurance and sick leave into gifts, for which we should be properly grateful, rather than rights that can be negotiated and fought for. Hmmmmm, that has a certain political ugliness, doesn't it? Something that smacks of patriarchy and don't you worry your pretty little head, miss. "Patronizing" after all, is not a compliment.  It's a comment on where respect is and is not given.

It's probably true in many fields. I wouldn't know as I've only ever worked in mine. But teachers run into the attitude a lot. If you dare to suggest the benefits and salary are not commensurate with the workload, people freak out. They call you avaricious and question your commitment to the work. Many people seem to think we should be doing this work for free. After all, it's for the benefit of the children, isn't it?

When I'm feeling especially cynical, I chalk it up to sexism. After all, one of the ways that teaching became a "women's profession" was through the argument that women were cheaper labor, that it wasn't necessary to pay us like you would men because men would take care of us. Notice that the number of men in the field grows the older the students are. So does the salary.

Like so much in our educational system, the reasons we have the system we do have changed, but we still have the vestigial pieces, clogging up the works. Women no longer expect to be "taken care of" financially by men. But it's still harder for us to earn the same dollars for the same work.

So, the question becomes, whose benefit is this system for? More and more each year, I become certain that it's not the children. After all, children are a long term investment. The short-term yields can't be counted in dollars. But the cost? Well, eventually that will be very high indeed. How's that for a cost-benefit analysis?

Posted by Samantha Bryant at 7:00 AM