I'm participating in another flash fiction project this month. +Becket Morgan put it together for the +Flash Fiction Project. This time, we have three images to incorporate into our pieces.  If you've never tried these sorts of prompts, I highly recommend it.  It helps push your mind in new directions, which can be wonderful for your life as well as your writing. Here are the images we're using this time (see below the pictures for the piece by me): 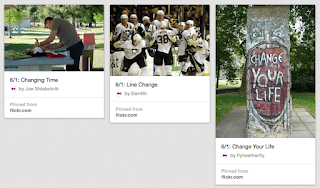 Charlie's mother always said, "Children will change your life."  He understood that, he supposed, in the general sort of way you understand anything you haven't experienced for yourself. It made sense. Adding new people to your life changes things. Even just a new friend, or a new boss. And a child, that was someone who couldn't take care of him or herself without you.

So Charlie told her that he liked his life, so he guessed he just wouldn't have any.  She'd shaken her head at him wordlessly and handed him his hockey bag and he'd run into the Sportsplex to get his gear on. That was the last time he ever saw her. Her minivan was hit by a wide turning truck and suddenly, Charlie was an orphan, just two months after high school graduation.

His mother had planned well, and Charlie still went to college as they had planned, still played for the team, as they had planned. He looked for her in the stands every game, and it broke his heart over again every time that she wasn't there. But he went on, as people do. He graduated. He got a job.

He wasn't good enough to make a career of hockey.  He was a good, solid player, but just didn't have that extra something.  He knew that, had planned for it.  But, still he loved it.  He played in the adult league at the Sportsplex he grown up playing at.

From time to time, he'd think about that last conversation with his mother and wonder.  But he had not married. He hadn't met anyone that felt right. Children didn't seem likely. Even though he'd always said he didn't want them, that made him sad somehow.

Maybe that was why he decided to take the job when he was asked to coach the Rink Rats, preschoolers.  He was looking for that change his mother had promised him.

Change came in the form of Ryan Whitaker.  He was the littlest guy on a team of little guys.  He had a wide face that became even wider when he smiled.  He worked hard for his age.  When Charlie came in to skate or practice, Ryan was always there, a look of fierce concentration on his face that Charlie recognized because he'd worn it himself.

One day, Ryan brought his mother to one of Charlie's games so she could meet his hero.  The game had been a good one, and Charlie was drenched in sweat when he pulled off his helmet and stumped over to the stands dripping wet slush from his skates and uniform to let Ryan introduce them.  "Charlie! Charlie! This is my mom, Annie."  Charlie took her hand, apologizing for his post-game stink. She smiled. She smiled and his heart fluttered in a strange way.  He asked if they would wait. He wanted to take them out for ice cream.

She said yes.  Some months later, she said yes again, in front of their family and friends.  Charlie swore he saw his mother in the pews, just for a second, clasping her hands under her chin like she used to in the stands. She was proud of him.

Posted by Samantha Bryant at 10:47 AM