Change What You See: Flash Fiction

I'm participating in another flash fiction project this month. +Becket Morgan put it together for the +Flash Fiction Project. This time, we have three images to incorporate into our pieces.  If you've never tried these sorts of prompts, I highly recommend it.  It helps push your mind in new directions, which can be wonderful for your life as well as your writing. Here are the images we're using this time (see below the pictures for the piece by me): 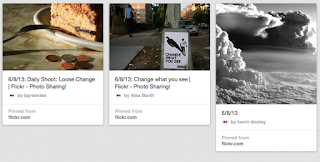 Anderson sat in the coffee shop, picking at the dry coffee cake with the questionably clean fork and letting his gaze wander the room in search of anything or anyone worth contemplating.  He wondered if the coffee cake would be any better if he picked it up and dunked it fully into the mug. The coffee was hot and tasted like coffee. At least they did something right here.

Giving up on finding anything interesting in the room, he turned his head to look out the window. The sky was grey with non-specifically threatening clouds. It might rain, or it might just stay grey and boring all day.  Anderson sighed. Nothing interesting ever happened around here.

The table bumped and Anderson turned to see that another man was seating himself across from him in the small booth. He opened his mouth to protest, but the man cut him off before he could speak.  "Hi, Anderson. Mind if I join you?"

Did he know this man? He didn't think so.  Though the man definitely seemed to know him. Knew his name at least.  He eyed the intruder cautiously over his coffee mug.  A dark haired man of indeterminate age. Anderson's best guess was that he was somewhere between thirty and fifty. He had nothing in front of him. No newspaper. No phone. No coffee mug. He just sat with his hands lying flat on the table top, his head turned to look out at the grey landscape.

The man turned and met Anderson's gaze, sharp blue eyes looking at him searchingly.  "It could be," he said, slowly. "If you change what you see."

"What do you mean? Change what I see? I see what there is." Anderson gestured broadly at the long, dirty street and cloud-entombed sky. Then at the dull, uninteresting people in the diner.

"Do you?" The man reached across the table and snapped his fingers in front of Anderson's eyes.

Anderson blinked. The man was gone. No one was across the table from him.  Had he fallen asleep? He looked around the room. It all seemed normal, people having their breakfast. There was that guy with the old fashioned hat. The one who dressed like it was 1950 still.  He was smiling at the waitress with the scar across her cheek.  She gestured with her shoulder at the fry cook, who was so tall he had to stoop so as not to bump his head on the racks of cooking implements hanging from the ceiling.

Anderson found himself wondering who these people were, what their stories might be.  When his waitress came back around, he smiled at her and held out his cup for a refill. The coffee smelled fabulous.  "How's the coffee cake?" she asked. He noticed the way her bracelet sparkled in the light streaming through the window.

Posted by Samantha Bryant at 11:30 AM