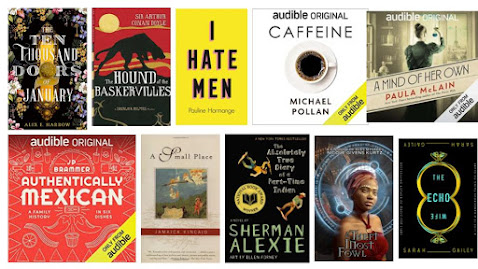 How was your month for reading?
I started strong with The Ten Thousand Doors of January by Alix E. Harrow, a wonderful portal fantasy story.
But then started to suffer from short attention span--probably due to the stress of my school district suddenly changing the plan and sending me back into the classroom six weeks earlier than planned, and four days before I had the chance to get immunized. (I'd roll my eyes, but I've been doing that so much, they might fall out).
I hate that when I'm under stress, it gets harder to enjoy my favorite escape . . .just when I need it most. So, I decided to try listening to some of the shorter works in my Audible collection that I hadn't listened to yet.
The Hound of the Baskervilles by Arthur Conan Doyle was a delight. I've read some Sherlock Holmes before and have enjoyed modern interpretations of the famous detective in film and television, so I was happy when my First Monday Classics book club chose this one, and handed me the impetus to revisit the characters in their original form. It made me want to read other ones, and also scratched my Gothic romance itch with the fantastic description of Baskerville Hall and the surrounding moors.
I picked up I Hate Men because I was curious where that provocative title might take me. As a fifty year old woman, I didn't find much in it I hadn't considered before . . .but I did think it thoughtful and articulate on issues of gender and equality. Unfortunately, the title means that the author will only be preaching to the choir.
Caffeine: How Caffeine Created the Modern World by Michael Pollan was a fascinating read, covering caffeine's development, especially as tied to tea and coffee, and effect on society, as well as some exploration of the physiological effects. It didn't convince me to cut myself off, but it did make me more cognizant of keeping control of my habit.

A Mind of Her Own by Paula McLain was my most disappointing read of the month. In trying to straddle fiction and nonfiction, it ended up pleasing me on neither front. I recommend The Half-Life of Marie Curie by Lauren Gunderson instead if you're interested in learning more about Madame Curie.

Authentically Mexican: A Family History in Six Dishes by JP Brammer was a quiet memoir about a man who grew up straddling two cultures: white and Mexican.

I'd heard of A Small Place by Jamaica Kincaid, but didn't really know much about it. I was surprised by the passion and anger of the essay, written in second person, addressed to "you: a white tourist." Highly recommended!

Sherman Alexie is on my list of disappointing men who got a little power and privilege and used to abuse women, so I probably wouldn't have read his book, The Absolutely True Diary of a Part-Time Indian, except that my daughter was assigned it for class and she wanted me to read it with her so I could help her if she got stuck on the schoolwork. It really is quite a good book, touching and honest-feeling (and thankfully not full of nasty attitudes about women). Great voice.

A Theft Most Fowl by Nicole Givens Kurtz is the second in the Kingdom of Aves series. I LOVE this creative speculative mystery series, set among bird-people and following Hawk Tasifa, our detective who is literally a hawk-person, able to see what is not seen. I look forward to more in the series.

The last book I finished in February was The Echo Wife by Sarah Gailey. I'm really becoming quite a fan of her work! (I also loved Magic for Liars) I actually don't want to tell you much about it because I think it's better to go in blind and just enjoy the ride in this one, but I will say that it left me thinking and got me in the feels on more than one front.

The Echo Wife wasn't a short-short like most of what I read this month, so maybe I'm over my short-attention-span problems for the time being. Hoping so!

So, what did you read this month? Tell me about it in the comments below!

Posted by Samantha Bryant at 12:39 AM