I had a bit of a rough start to 2021, as did many of us, I'd imagine. I was caught in all the same whirlpools and eddies that had kept me spinning in circles for most of 2020, so the month didn't have that "fresh start" feeling that it sometimes can. (It got a little better late in the month).

I was even STILL working on the fourth Menopausal Superheroes novel, a project that should have been finished and sent to my publisher on January 1, but which I finally handed in on January 31. This is officially the latest I have ever been on a deadline of any sort, and definitely the first time I've been that late on a publishing deadline. Those who know me IRL can probably imagine the tizzy that had me in.

I shut down nearly everything I do for entertainment during January: almost no TV, very little gaming, even less socializing than usual. But I didn't give up reading.

In fact, I had a great reading month! I read five books and really enjoyed all five.

I started with a biography of Bruce Lee by Matthew Polly, which I enjoyed as an audiobook. I already knew enough about Bruce Lee to know the man had led a fascinating, if all too brief life, so it's no surprise that the details and controversies of his life made for good material. But I've read more than one biography that managed to make an amazing person into boring reading, so I'm happy to report that this telling of Bruce Lee's life story was thoroughly engaging, and struck a balanced tone that painted the man neither as a blameless paragon nor a villain, but as the driven performer and ambitious person he was.
When I can find time for it, this book made me want to have a personal Bruce Lee film festival, hunting down as much of his work as I can and watching it. Coincidentally, right after I read this book, I found the TV Show Warrior, a project Bruce Lee dreamed of bringing to fruition and which has now finally been produced for television. My husband and have watched a few episodes now and it's powerfully done. I only wish Lee could have seen it made in his lifetime and taken the starring role he'd planned for himself.
At the same time, I was reading Charles W. Chesnutt's The House Behind the Cedars on Kindle for my First Monday Classics Book Club. I'd never heard of this book before, so I was so glad my book club brought it to my attention. A study on the idea of "passing" racially, the story centers around a bi-racial light-skinned woman just after the Civil War and her ill-fated romance. The ending upset me, even if it might have been the right one for the story, and I still find myself thinking about the book weeks after I finished it. It deserves to be better known!
Chesnutt's explorations of race led naturally into Kindred by Octavia Butler, a book that had been on my TBR list for ages, but which I had not yet read. It's a very unusual time travel story, in that no time is spent on the mechanics of time travel. Instead, being pulled back in time is just something that happens to Dana, the main character, a woman from the 1970s who finds herself among her ancestors in the antebellum south, seeing first-hand the fraught relationships and lasting damage the institution of slavery wrought. I read this one moving back and forth between an audiobook and the kindle edition and found it fascinating. It's taken over the "favorite" spot for me of books by Butler, though I have not yet read everything she wrote.
Circe by Madeline Miller was all over Instagram a few months back and I decided now was a good time to dive into it and I'm so very glad I did. It hit so many positive notes for me: fierce and difficult protagonist, complicated love story, reinterpreting and reimagining known mythologies. I have a feeling this one will be on my "best of" list when I get to the other end of 2021.
The last book I finished in January was The Butterfly by Lucy Blue, a romance/mystery in the Sherlock Holmes universe. I loved this interpretation of Holmes, and hope that Blue will consider writing more stories like this one in the future. In the meantime, I've downloaded her Stella Hart series of romance mysteries that I've been hearing good things about. They sound right up my alley. 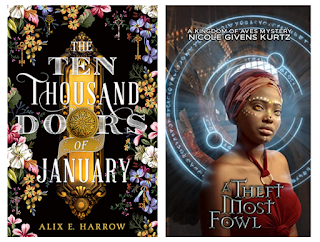 As the month ended, I was in the middle of two more books that are both wonderful so far. Check back in February and I'll let you know what I thought! In the meantime, I'd love to hear from you in the comments. What did you read this January? Any favorite authors I ought to check out?
Posted by Samantha Bryant at 8:02 PM