2020, man. Whew. Don't those numbers just wear you out every time you see them? Between the pandemic, the social unrest, and the politics, I've never been so happy to see a year end.

Oddly, it was an excellent publishing year for me, though. I guess there's balance in that?

Seriously, though. I had eight works published in books this year! Holy-freaking-cow, that's a lot.

Since time was this weird warped thing this year where days could last for years and months go by in a blink, I didn't really realize so much of my work had made it out there into the universe until I took a moment to look back and reflect.

I am greatly amused to realize that I published 4 super-heroic works and 4 works of horror. That's 2020 in a nutshell isn't it--a horror show with unexpected heroism.

Long time readers might remember that I had some publishing turmoil in late 2018, early 2019, when I had to reclaim my rights from a failing publisher and seek a new home for my work. The story has a happy continuation though, in that my Menopausal Superhero work is now housed with Falstaff Books, a thriving mid-size publisher out of Charlotte, North Carolina, full of the "Misfit Toys of Fiction."
Because their publishing schedule didn't allow for seeing a fourth Menopausal Superhero novel into print until 2021, we decided to release short works in the series this year. Friend or Foe, a novella that bridges book 1 (Going Through the Change) and book 2 (Change of Life) came out in March of 2020.
The Good Will Tour, a stand-alone adventure for Flygirl and Fuerte came out in May.
And Through Thick and Thin, a collection of short stories set in the Menopausal Superheroes universe came out in August.
Finally, all the short works were collected into an omnibus edition in Agents of Change, which includes all these works in a single volume and came out in November.
While all this was happening, I was busy writing Be the Change, the fourth Menopausal Superhero novel. I'm in the last of my self-edits/revisions right now, with plans to send the finished book to Falstaff by January 1st. I think you're going to love this one--I know I fell in love with my character all over again writing their stories here.

Then came the horror! Although horror was one of my first loves as a reader, I didn't start out writing it. In the past few years, though, more and more of my short work has leaned toward the weird and frightening, and this year, four of my horror short stories made it into anthologies.
Stories We Tell After Midnight, Volume 2 from Crone Girls Press has been described as traditional horror. These are the kinds of horror stories that drew me into the genre in my youth--stories that give you a good shiver and might make it a little harder to fall asleep at night. That's not to say that they are staid, boring or without humor and innovation. My story, "The Cleaning Lady," began as part of a Halloween flash fiction challenge proposed by writing-friend Bliss Morgan and might have been influenced by the fact that I was watching Downton Abbey at the time and thinking about servant-master relationships.
Slay: Stories of the Vampire Noire from Mocha Memoirs Press asked for vampire and vampire-slayer stories set in the African diaspora and featuring black characters. My daring little tale, "His Destroyer", is a retelling of the Passover story, about the 10th plague of Egypt during which the first-borns of Egyptians households were slaughtered. The story as I learned it never specified who exactly His Destroyer was, and how exactly the children were killed. So, I wrote this story imagining those details for myself. I gave myself the chills, so hopefully you'll get them, too, if you read it. This is a giant collection--with 29 stories of HUGE variety. I'm so excited to have my work included among such giants of the genre.
Hindsight's 2020 came about when a group of writers who used to share a publisher came together as a support and recovery group for each other (yes, *that* publisher--see link above). Our theme was regret, or hindsight, and I wrote a wonderfully creepy little thing called "I Should Have Known" set in the Victorian era about love, sacrifice, and monstrosity. So much fun to write!
Outsiders Within from Abstruse Press just came out yesterday! It's a collection of cosmic horror stories and you might enjoy your trip through madness with Margaret in my story, "Margaret Lets Her Self Go." This is the same press that published Deadman Humour: 13 Fears of a Clown in late 2019, which includes my bit of Lovecraftian horror, "The Gleewoman of Preservation." 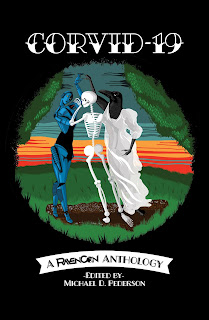 And if that's not enough of my work yet, you can also support the Kickstarter for Ravencon to read my story, "If the Moon is Real." Hear an excerpt here, on YouTube.
Since Ravencon, a small Virginian convention close to my heart, had to cancel the 2020 and 2021 live events, they've put together this collection of short stories featuring corvids--a class of birds that includes the eponymous Raven of Ravencon.
The hope is that the Kickstarter will earn enough money to keep the organization afloat and "in the black" until we can gather again as an unkindness or conspiracy of ravens in person.
Because support has been so strong, they're already working on a stretch goal to create a second volume of the anthology! The Table of Contents includes some pretty impressive names as well as some new writers just establishing a foothold in the industry. Well worth the few dollars, AND you get to support a small convention at the same time.
I've already got a few more works in the pipeline for 2021, so despite the weirdness of this year, I'm feeling pretty successful on the publishing front. If you've read any of these works, please drop a review on Amazon or Goodreads. Even just a few words is enough to help the visibility of my work. Just "I liked it" or "that woman writes some crazy stuff, yo!" is the best gift you could give me.

Posted by Samantha Bryant at 12:35 PM