Fellow author Andy Brokaw offers a writing prompt each week for her "Wording Wednesday," so called because the prompts are released each Wednesday.  You can check it out and participate here if it catches your fancy, too. You can see what I wrote for the first five prompts here,  here,  here,  here and here. This one is the last in the current series, but you can participate at any time, and she'll be back with more prompts soon. It was interesting how many of these evoked a story of love or romance from me, my favorite kind of Beginning.

Today's picture-prompt is by Agnes Csiszar Russo.  You can see the story it inspired for me below the art. 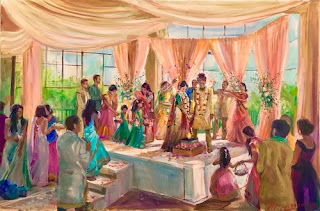 Formal events usually made me pray I'd come down with something contagious and blotchy so my mother wouldn't make me go. So many people forced to be polite while uncomfortably dressed and gathered in a room inevitably either too hot or too cold. The roiling emotions churning through a crowd like that were overwhelming. Weddings were the worst, with matchmaking on the mind of every family with an unmarried child.

But this was Ananya's wedding. I couldn't miss it, even if I did actually have something contagious and blotchy. It might be the last time I'd get to see her. Her husband was a very successful businessman. That meant they would go wherever his business demanded, even if that took my best friend to the other side of the planet and beyond my reach.

We'd had our weepy goodbyes already, and I'd kept my feelings of abandonment and loneliness to myself. I wouldn't taint her happiness with selfish concerns. She deserved a life of laughter and gaiety and I wouldn't be the mopey friend who brought her down at her own celebration.

When the day's festivities began to wind down, I slipped out the back of the pavilion, hoping to make it back to my own room before the crush of the departing crowd. Outside, the night spread almost moonless, and the stars shown like jewels in the sky, all the brighter against the darkness. Though I could still hear the thrum of music behind me, the comparative quiet was a relief and I released a sigh that threatened to become a sob.

"A beautiful night, isn't it?"

I quickly wiped the wetness from my cheeks and turned to face the man who addressed me. Arjun stepped out from under the trees, his gold brocaded coat catching the rays of the streetlights and making him glow. Not that he needed lighting to glow. He had long been regarded as the most handsome man in our social set, but like me he was quiet and preferred to remain in the background. Many a mother lamented that he didn't seem to have any interest in taking a wife.

When he reached for my hand, I let him take it and press it to his lips. I stifled a laugh at the formality of the gesture. It seemed so strange from a man I'd known since we were small children. A suppressed smile made his own eyes turn down and I knew he was teasing me, so I swept into an elaborate curtsy, spreading my blue and green skirts around me like sea foam.

"So, our Ananya is leaving us."

The smile fell from my face and my barely contained tears threatened to break their dam. I took a deep breath and let it out shakily. "Yes. They're going to New Zealand for their honeymoon, and then to France. Sai has offices everywhere."

He nodded. "Everywhere but here."

I dipped my head. His finger stroked my cheek and lifted my face. "It will be all right, Diya. You won't be alone. You will always have me."

My eyes widened. What did he mean? I turned to ask him, but he had already melted away into the darkness under the trees. I touched my cheek where his fingers had brushed it, and turned to find the path to my room. My step was lighter now, and my heart felt full.

Always? did he really mean that? I had to admit, part of me hoped he did.
Posted by Samantha Bryant at 12:09 PM