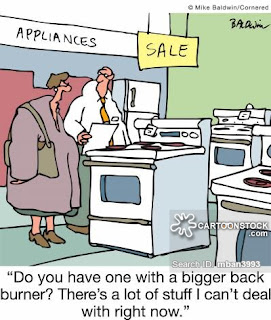 I'm in a slow period at the moment, so far as writer productivity. But I can see relief on the horizon. It's only a month or so now until school breaks for summer and I can be a full time writer for a few blessed weeks.

In the meantime, I'm letting a few projects simmer on the back burner, hoping to turn them into something yummy to read in the next few months.

My main project, a young adult dystopian romance (working title Thursday's Children) has been moved to the slowcooker so that it keeps warm even though I don't have enough mental energy to finish it right now. It's about two thirds written, but it's patchwork. It has a beginning and a late middle, but no early middle and no ending. To make sure it doesn't go stale on me, I stir the pot at least weekly, revising an old scene or working on a new one. I'm feeling good about finishing in that first month after school ends.

On the back burner though are a BUNCH of other projects and I'm enjoying trying to decide what to work on next (as soon as I finish Thursday's Children).

Cold Spring is book one of a historical fiction trilogy. I still love Lena and Freda, the sisters at the center of the story, but finishing their story is going to require a LOT of research if I'm to do it justice. I feel solid in the first of the planned three books, but I'm holding off doing anything with it (as in seeking publication) until I've written all of it. That could end up being work that spreads out over the next decade or so.

Rat Jones and the Lacrosse Zombies, a NaNoWriMo project from a couple of years back, wants to be a middle grades or young adult novel about bullying and witchcraft. I've got a full draft of that one, but I think it's needs restructuring and to remember that it's a kids' book.

His Other Mother, the first novel I ever finished writing, is percolating back there, too. I'd really like to give it a once-over, now that I know more about writing and structure than I did back then. It's issues-driven women's fiction, and I still think it's a powerful story that could find a publishing home with another comb through to smooth out tangles and snags.

A few short stories are pulling at me as well. "The H.O.A." will fit into a collection I've been working on called Shadowhill, which are all weird tales that take place in a suburban subdivision suspiciously like the one I live in. A few of those stories have been published, and I'd love to collect them into a single publication. Another one from that collection, "Suburban Blight" is begging me to turn it into a novel, but I keep telling it to wait its turn.

Two other short stories are jumping up and down in the background, too, one called "Frankenstein in Savoonga" and another called "Another Turn of the Screw," each riffing on the classic literature they reference. Oh yeah, there's also that suffragette story I started at a writing workshop that I've been promising myself I'd finish: "Tiger Lily."

The fourth and fifth books in the Menopausal Superhero series await my attention, but I think they're going to wait for 2019. Taking 2018 to write other things has been rejuvenating so far, and I want to keep letting that energy build.

Of course, there's a new novel idea tugging on my skirt hem, too, this one a gothic mystery novel, featuring a female architect named Devon. She's persistent about wanting her story told, and I've been dying to write a gothic novel since I was about nine years old.

If I can write even a third of this stuff this summer, I'll feel like a powerhouse. How about you? Got anything on your back burners you're anxious to get back to?