Heart of Darkness is a book that I've meant to read for a long time. But it kept shuffling back down the TBR pile over the years since I first heard of it. Maybe I was intimidated by it. Or just wasn't sure if I really wanted to delve into the heart of darkness. Darkness is frightening enough just around the edges.

I knew about it already in the way that book people know about books they haven't read just from breathing the air around other books and other readers. I knew it was set in Africa, that people weren't sure if it was racist or not, that it had a theme of madness, and that people love the language.

When my library's First Monday Classics Book Club selected the novella for the March discussion, I was happy to have the impetus to read the darn thing at last and decide for myself. I ended up both listening to it as an audiobook (A Signature performance by Kenneth Brannagh) and reading it as an e-book on my phone.

Plot-wise, it's an odd sort of book. A man named Marlow is in a boat with some other men and he tells them a story. The story is about his years in Africa as a younger man, and his fascination with another man called Kurtz. With that frame, the whole thing is really a story about a man telling a story about another man. Though it often feels very immediate in the telling, the reader is not really there, in the moment, at any time. Instead all events are narrated at a geographical and temporal distance.

But not all stories are really about what happens. This one isn't.

So, what is it about? 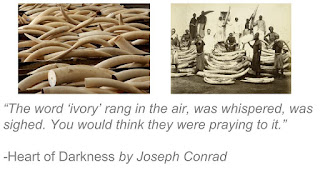 Colonialism and imperialism are certainly a major theme. The murky politics of what's right and moral in the predatory relationship of those who profit off the labor or misfortune of others. What's taking advantage, and what's playing fair? What's being practical and what's letting things slip? Where are the lines and how many can you cross before you've gone too far?

Which leads almost directly to madness, another major theme. The narrator, Marlow, becomes fascinated with a man that he only barely gets to meet. Just from his legend. Kurtz. His obsession grew as he grabbed onto every little tidbit he could learn about the man. What he'd done, who he was, the stories he told. This was the part that really grabbed me. Did Marlow see the man he wanted to be? The man he feared he might become? 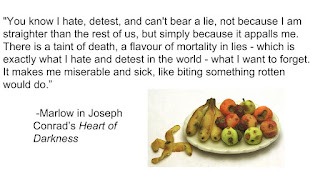 Marlow wanted to see himself as a man set apart. It's a vision of masculinity I first encountered in the works of Ernest Hemingway. It's an uncomfortable one, tense like a spring that you know will eventually pop. It's one I've seen men try to live up to, and hope our culture is allowing them to step away from.

The prose is gorgeous, the tone is ominous, and, in the end, I'm not sure even Marlow knows what the point of his story was. He's still looking for answers.