It's my pleasure to host Harding McFadden for a guest post today about The Great Detective. His story is part of the new anthology An Improbable Truth: The Paranormal Adventures of Sherlock Holmes, edited by A.C. Thompson. 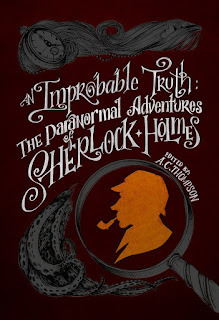 I suppose for everyone who has read of the Great Detective, there will always be that one actor, that one giant among the legions, who is Holmes. For me, it was always Jeremy Brett. The voice, the mannerisms. It was like the first time that I saw Michael Gambon play Maigret: there could simply be no other. Brett owned the part, and after the first time seeing him perform it, I could not read Doyle’s stories without hearing the dialogue spoken in that voice.

When I was hardly a child, maybe eight or ten years old, my uncle gave me a copy of a Holmes collection full of great stories, and accompanied by wonderful illustrations. I fell in, and like so many others, never fully climbed out. There was passion, intrigue, mystery, and a sense of family between these two men that went beyond the words used. Like so much of what I read and watch and write, it is the family that stays with me.

At the heart of my little attempt at a Holmes tribute is this theme of family. (In honesty, if you have had the misfortune to read any of my other, few published stories, this theme is always present. You can blame my wife and children for this: upon their arrival, all of my priorities shifted. I have never been so happy.) The narrator of the piece is Watson’s daughter, and through her words, I have tried to express her love of her parents, as well as the grumpy old genius that she shares her life with.

This is my second time working inside Doyle’s world. About a year ago, if that long, I placed a story in a collection of Professor Challenger tales. When outlining that one (I needn’t have bothered, as the finished product came out very different than the outline, regardless of the wasted hours and days of research), I came to the early conclusion that I simply was not talented enough to emulate the narrative style that Doyle had created. To get past this limit to my ounce of talent, I opted to create another narrator, to tell the story in my own way, without having to step on the fingers of a giant. Likewise, with this Holmes story, I have opted to do the same.

For as long as Holmes and his adventures have been in my life, I have likewise read horror. Initially, the cheap, easy to copy splatter of 80’s cinema, then as my taste became more refined (see: stuck-up), I began to dwell on horror that actually affected me. Any fool with paper and pen can write something grizzly and disgusting and call it horror. It isn’t. It’s just disgusting. Not to say that there is no place for disgusting stories, but I can hardly call them horror. For me, horror is something that creeps in and takes a nap in your subconscious, waiting until just the right time to wake you from a sound sleep, bursting out in cold sweat, with no chance of sleep returning that night. This is hard. I suppose that’s why when I come across one, I hold onto it for dear life. F. Paul Wilson’s epically creeps “Foet” leaps immediately to mind.

When I was writing this story, I didn’t want it to be just Holmes and Watson stumbling onto something horrific on any other afternoon. I wanted the world that the Detective and my version of his chronicler to be as much a piece of the terror as the happenings within the story. It isn’t just England, come last Thursday. It’s a mess of a place, kicked around by the heavens, until the only thing that separates it from Hell is a few degrees. I wanted it to be a horror story through and through, where no matter how well things work out, they’re still kind of screwed. Don't think, however, that this means the story is an epic downer, where you are tempted to open an artery as soon as you put it down. You see, I am cursed with a sickening optimism. No matter how bad the day, I still feel that things will work out for the best. I’ve said, more often than even I probably realize, that if you can’t find the positive in a thing, then you’re just not looking hard enough. Lastly, I have tried to instill this belief in the story.

So, let’s see: Brett, horror, optimism… Have I missed anything? Honestly, I don’t know. I can only hope that this doesn’t read as the ramblings of some poor fool, more full of himself  than anyone has a right to be. In truth, I can only hope that once you’ve read my little “thank you” to the late Mr. Doyle, that you like it, and don’t feel that you’ve wasted your time. I suppose that in the end, that’s all that any writer can hope for…

Have a fine day.

ABOUT THE AUTHOR:
Harding McFadden is a Pennsylvania-based writer who lives a blessed life with his Wonderful Wife and Perfect Children.  When he isn’t trolling the internet for open anthologies, he is constantly working on that novel that he’s been working on.  He has been fortunate enough to have been published some half-dozen times: twice on everydayfiction.com, in the August issue of Mystic Signals, and in the anthologies Challenger Unbound, Dragon’s Hoard, and The Idolaters of Cthulhu.  He has no regular social media outlets, though he will be starting somedamnthing-or-other soon, at the insistence (and threatening mannerisms) of friends and well-wishers.  He hopes that you like his story.

From “The Adventure of the Slow Death: From the Scourge Diaries of Emily Watson” by Harding McFadden

It was some time after the Case of the Crestfallen Corsair that the great detective allowed me to fill my late father’s shoes as his biographer. This would have been after the Great Scourge left half the globe a charred mass, the other half a sweltering, desiccated nightmare. Those of us in what was left of Great Britain looked fearfully to the dawn, constantly on alert for our own time. Nine months with no Heavenly fire, and still we shook in our shoes.

“It was hardly a Divine fire from Heaven,” he told me over tea one melancholy evening. I had made the error of reporting to him the judgment of many papers of the time, that the sky of fire had been the Judgment of God. “Nothing more than a particularly large ejection from our sun. One with devastating effect, but a natural occurrence, nevertheless.”

In my minds-eye I could hear him saying these words around the stem of his pipe. Now, however, there were no ‘Three Pipe Problems.’  Inquiring as to why one particular day, I was informed that the smoke did nothing to focus his mind of late. I couldn’t help but assume that it was the constant barrage of ash flowing over the world that put him off of his pipe. How does a man willingly spark a match when the charred reminders of half of mankind float by his window on every breeze?

A small charcoal of my late parents adorned a place of honor upon the stone fireplace around which we sat. We both looked upon it through the silence that evening, and many others. No fire burned, nor embers glowed. Even through the deepest winter past, the heat of day was nearly intolerable. It was through habit and emotional necessity that we persisted there. The past may be lost to us, but should never be forgotten.

With a tip of his cup, he said to me, “I find that I miss them more often of late. Never let you think that those friends around you are but passing fancies. They are the spice of life. Without them, our outlooks are simply…  Bland.”