Why We Didn't Go to the Football Game Today

As I always tell my students, No hablo deportes. (I don't speak sports). In general, my policy on sports is that if my daughters are not playing, I don't care.

My husband, however, does speak sports. He's not a die-hard, face-painting tail-gater, but he does enjoy a bit of football. Especially when his alma mater, UNC, plays.

So, when UNC had a teacher appreciation deal, I bought tickets to the game today vs. Virginia Tech for the Sweetman. I figured I would enjoy some nice fall weather, some people watching, and some junk food while he enjoyed the game.

So, we set off for the game. We looked for parking downtown, but, of course, couldn't find any. We'd waited until too near game time for that. We did find a lot of rich people. You can tell them by the type of baby gear they use, their shoes and their haircuts. Even when they are wearing basic UNC clothing, like any fan, they have the most expensive items from the shops. It also shows in the way they assume that their own comfort and ease is more important than the safety and wellbeing of others. (Sorry if the chip on my shoulder is showing). That was probably our first clue that we didn't belong there. Obviously, these events are for Socs, not Greasers like us.

If we had found parking, it would have cost us $20-$40 depending on which lot we let gouge us. Most of the time, when we go to Franklin Street for a little fun, we spend $4-6 on parking. We considered the park and ride, but then realized that even that would cost us $10, plus a lot of time in waiting for a ride back to our car, which adds to the babysitting costs.

Now, if I had not gotten a special deal, those tickets would have been $120. That's a cash outlay not that different than a night at the theater. I don't know about your family budget, but that's a chunk of change in ours. And, when I go to the theater, I get a place to park along with my ticket. If there's a charge, it's more like $5.

Everyone has their thing they hate to pay for, and one of ours is parking. Driving among all the rich people and calculating how much we were going to have to spend to park and eat, we were both getting a little grumpy. Sweetman was getting that tense look that had him hunching around the steering wheel. I was hoping he'd feel better when we finally got to the game.

But he surprised me by asking how I'd feel about giving up the money I'd spent on the tickets and doing something else instead.

So, instead, we went out to lunch at a place we'd been meaning to try (far enough away from campus that we could park there). Then, we went to NC Botanical Gardens, where we hadn't been in a long time. We sat and talked, admired beautiful plants. Then, we went to our favorite game shop and the game Sweetman had been stalking was in! Then we did a bit of practical shopping at Target, got a milkshake, and did the grocery shopping. That's what we call a married parents date. Way better than football. :-) 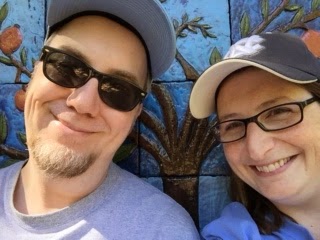 Posted by Samantha Bryant at 7:46 PM