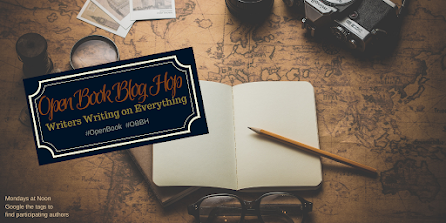 Welcome to Open Book Blog Hop. You can find us every Monday talking about the writing life. I hope you'll check out all the posts: you'll find the links at the bottom of this post.

Nov 28, 2022 Do you use real or fictional cities in your writing? How do you incorporate them into the story?

My Menopausal Superhero series takes place in an imaginary southern city, sort of an amalgam of several cities in the region. I made the decision not to use one particular real city because I didn't want to be limited by reality in that sense, or stuck researching things I don't know about a city.
So, I invented Springfield and have avoided saying which state its in, though careful readers could see that must be somewhere around North Carolina, South Carolina, or Virginia because of the travel times to other real places that are mentioned in the series.
I named it Springfield because I was after that "this could be anywhere" kind of feeling--there's a Springfield in 34 of the United States, and 58 of them worldwide. Most ensemble superhero stories seem to center around a particular city, and I wanted to have that same feeling, but set it someplace smaller than a New York City analogue like Gotham or Metropolis.
I used a similar strategy for naming each of the Menopausal Superheroes. I decided what year she was born and looked up most popular baby names for that year.

So, Patricia "Lizard Woman" O'Neill was born in 1955.
Helen "Flamethrower" Braeburn was born in 1950.
Dr. Cindy Liu was born in 1946.
Linda (later Leonel) "Fuerte" Alvarez was born in 1965.
Jessica "Flygirl" Roark was born in 1980 (she went through menopause early, as a cancer survivor).
All their very common names are intended to give an "everywoman" feeling to the characters. All the heroes had in common that lived in Springfield, which put them in contact with Dr. Liu--the mad scientist who started it all.
Springfield is a medium-sized city, big enough to have urban parks and urban crime. Museums, theater, restaurants, and local monuments, but not likely to have a large tourist trade. Probably Springfield didn't make the news much until some of her citizens developed unusual abilities.
So, that's my imaginary city. Do you like writing and reading stories that take place in real places? Or do enjoy made up places? Or like me, maybe you love both! I'd love to hear your thoughts in the comments.

You are invited to the Inlinkz link party!

Click here to enter
Posted by Samantha Bryant at 2:00 AM