What I Read in June

I only read four books in June, but all of them were good. I spent a goodly portion of June traveling (a long awaited trip to Ireland with my mom, sister, and aunt--I'll post about it soon). So here's a quick peek into my summer reading life.

I started the month already in the middle of an audiobook which I finished in the first day or two: The Final Girl Support Group by Grady Hendrix. I'm becoming a bit of a Grady Hendrix fan girl. He won me over with My Best Friend's Exorcism, which was pretty much liquid nostalgia for me--channeling both the teenager I was, and the books I read at the age.

The Final Girl Support Group scratched that nostalgia itch again, and gave me a wonderful story of women's friendship and the ways we help one another survive. You might not expect a book about the survivors of horrific violence to have such a heart of empathy and kindness, but it absolutely did and I loved it.

After that, I picked up George Orwell's Animal Farm, which was the June pick for my First Monday Classics Book Club. I read it as Kindle/Audiobook, going back and forth between the two, which I often do with Classic reads.

I'd read it before, as a teenager, and it really helped me understand Russian communism--I've always apprehended history better through fiction. Re-reading it as an adult, I was struck by the deep-seated cynicism. Sure, it's a story about the failure of the Russian attempt communism. But more than that, it's a fable about the inability of humanity to build a system that doesn't rely on the exploitation of someone, regardless of the best of intentions. Depressing. But, he's not wrong.

Next for me was The Secret History of Wonder Woman by Jill Lepore, which I enjoyed as an audiobook read by the author. It's probably no surprise that a woman who writes a feminist superhero series of her own has an interest in Wonder Woman.

I picked the book based on title alone, so I didn't know what to expect really. What I got was a really intriguing history of the social movements of the early 20th century and of William Moulton Marston, the man who created the character.

Fascinating stuff, even if it took a long time to get Wonder Woman. It's sort of academic in tone, but I don't find that off-putting. I'm a bit academic myself. It's one of those books that extended my TBR again, because now there are so many topics I want to read more about!

The last book I finished in June was Akata Woman by Nnedi Okorafor. I started it in May, then set it aside (it was on Kindle and I was feeling screenburnt) and picked it back up for airplane entertainment on my way back from Ireland.

It's the third and final in the Nsibidi Scripts trilogy, in which we meet Sunny Nwazue when she finds out that she is a Leopard Person (Nigerian magical person) and we watch her grow into herself and her powers while building powerful friendships with three other young people. 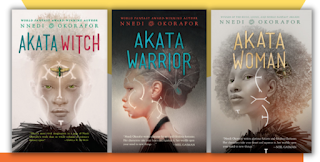 I really enjoyed the series, which felt positive and light and had a sense of wonder and joy in the magic. Definitely more optimistic than grimdark. Highly recommended.

So that was my month in books. I finished the month with a good start on David Copperfield, the August pick for my classics book club, and I'm poking at a cool horror anthology I'll tell you about at the end of the month. How about you? What did you read this month?

And here's your reminder to review what you read! Especially if it was by a less-famous writer like me. Your reviews, no matter how brief really help with the visibility of our work.

Posted by Samantha Bryant at 7:56 PM